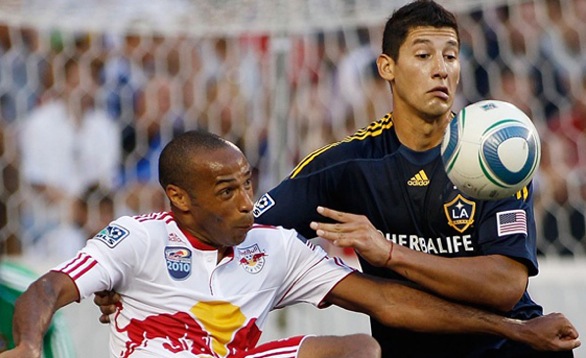 A trip to New York did not matter. A star-filled lineup did not either. The Los Angeles Galaxy earned an impressive 1-0 victory against the Red Bulls on the road in front of a sold-out stadium crowd.

With their seventh road win, the Galaxy keep stamping their name in the MLS books. They are now 13-3-4 overall and stand alone atop of the Western Conference standings with the best mark in the league with 43 points. Los Angeles is 7-2-2 when away from home, and this has certainly amounted to their collective success, which has been led by striker Edson Buddle.

Buddle scored the lone and eventual game-winning goal in the 10th minute. The tally was his 13th of the season, which is a league best thus far. Brazilian playmaker Juninho sent a pass to Buddle, who escaped the Red Bulls’ defense for the 10-yard score from the box. Buddle leads the MLS in scoring even though he missed five matches due to his more than a month stint with the United States men’s national soccer squad at the World Cup in South Africa. Buddle is averaging nearly one goal per game played, having nailed 13 in 15 affairs.

Midfielder Landon Donovan follows with five scores, but he has 11 assists to go along with the goals.

“We’re back to the way we played in the beginning of the year,” Donovan tells lagalaxy.com. “There’s been a lot of talk about N.Y. in the last few weeks, and we wanted to let people know who the best team in the league is.”

And the Galaxy certainly did just that even though the Red Bulls had a lineup that included three stars players in that likes of Colombian forward Juan Pablo Angel, French striker Thierry Henry and Mexican defensive midfielder Rafael Marquez.

“You can see the difference in the skill level, the intelligence, the work rate, the positioning,” Donovan goes on to state. “You can tell when guys like Henry and Marquez are on the field that they bring something a little different, and they’re going to make our league a lot better.”

Marquez made his home debut and second start for New York against the Galaxy. “I’m not happy at all. I need more time to perform at my best level,” Marquez tells newyorkredbulls.com. “It’s hard to know how long it’s going to take.”

New York is currently in second place of the Eastern Conference with 31 points (9-7-4), six behind leader Columbus Crew. Even at home, N.Y. could not top the best in the west. “They showed that they were a better team on the day and they deserve to be where they are,” Henry says to newyorkredbulls.com. “But I think we have good potential, and when this team’s going to be ready, we’re going to be able to compete with them. But we couldn’t compete with them today.”

The Galaxy are no longer the most offensively threatening unit on the pitch since Real Salt Lake has taken over that statistic, but their true success has come at the hands of the defensive effort. Defensively, goalkeeper Donovan Ricketts has shined with 10 shutouts, allowing just 13 goals in 19 starts. Defenders Omar Gonzalez, Gregg Berhalter, Sean Franklin, Todd Dunivant and A.J. DeLaGarza have cemented their names with consistently solid performances throughout the entire 2010 campaign.

Los Angeles looks to continue its victorious ways Saturday as they visit the San Jose Earthquakes. Kick-off is at 1 p.m.

Coach Out Due to Illness

Galaxy head coach Bruce Arena traveled with the team to New York over the weekend but was not on the sidelines to direct the squad. Arena, who watched from a private box, spent two nights in a hospital with what may be Dengue fever, which is attained through mosquito bites in the tropics. The Galaxy made a trip to Puerto Rico Aug. 4 for a CONCACAF Champions League contest against the Islanders.

A week ago English midfielder David Beckham joined the Galaxy training sessions en route to begin rehabbing, conditioning, practicing and strengthening his latest injury (torn left Achilles’ tendon). Beckham could make his 2010 debut in September or earlier. He traveled with the team to New York; he sat on the bench watching his teammates. English Premier League asset West Ham United has expressed interest in signing the Spice Boy through a loan deal.