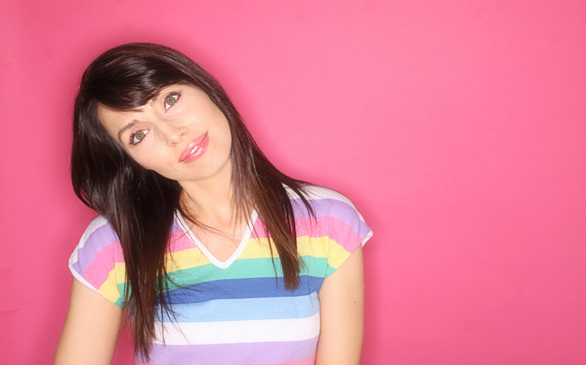 I could say a lot about comedian Whitney Cummings.

I could mention that she is a rising star on the stand-up circuit. Or that she’s making quite the stir in what most would consider a boys’ club. I could gush that she’s smart, witty, sharp-tongued – the whole shebang. But honestly, who cares about all that?

All that really matters is whether or not she’s funny.

You may know Cummings from Chelsea Handler’s roundtable pop culture bash-a-thon, “Chelsea Lately.” As a regular guest of the show, Cummings has a knack for tearing celebrities apart.

“Stand-ups, we really have a thing for being able to be mean off the cuff. Being horrible people, it’s very easy to come up with that stuff,” explains Cummings. “It’s like I’ve been preparing my whole life, i.e. my bad childhood.”

That ability, coupled with a relentless work ethic, has landed Cummings in good company. Last summer, she made her dais debut on the “Comedy Central Roast of Joan Rivers.” Still a fresh face, Cummings was ribbed by peer Greg Giraldo as he noted, “Whitney Cummings is here … for some reason.”

And as piercing as his observation, it wasn’t to say Cummings hadn’t earned her spot. As a writer on the prior roasts of Bob Saget and Flavor Flav, Cummings had already written everyone else’s jokes – it was her turn now. So, she elbowed her way onto the starting lineup after sending in a tape of her charity roast of New York Giants owner, Steve Tisch.

And how’d she do? Arguably, she did better than Giraldo himself, taking home joke-of-the-night with “Joan, I loved you in The Wrestler.”

“The bar was really high in terms of how mean and funny to be,” explains Cummings. “It’s a skill. A lot of really amazing comedians aren’t great at roasts, and a lot of mediocre comedians are very good at roasts. It’s a weird skill to have.”

Weird of a skill as it is, Cummings has it in excess. On stage almost every night and writing all the time, she has built her comedy muscles to juicehead proportions. You’ll notice that when you watch her one-hour Comedy Central special on Aug. 21.

“My comedy picks up where ‘Sex and the City’ left off. It’s basically all about sex and relationships from a twisted, dark point of view,” describes Cummings. “Personal things happen and then it just blossoms into this big rant.”

But it wasn’t always all sex and relationships for Cummings. At first, while pursuing her communications major at University of Pennsylvania undergrad, she took a foray into journalism and came out with some interesting viewpoints.

“Honestly, local news is so much funnier than stand-up. It’s so stupid how ridiculous it is. It’s a bunch of trannies talking about dogs getting stuck in fountains,” Cummings proclaims.

On summer vacation from school, Cummings had signed up for an internship at a local NBC station in her hometown of Washington, D.C. Eventually, she and the other interns were given the opportunity to be filmed reading over the teleprompter in order to create a newsreel.

“I was trying to read it, and I was hysterically laughing at all of the horrible stories,” Cummings recalls. “I was like, ‘I’m clearly not cut out for this. I think terrible things are funny.’”

So that was that for journalism and Cummings. Instead, she graduated college and moved out to Los Angeles to be a stand-up comic. No one has been keeping score, but ever since: Local News: 0, Comedy: 1.

Cummings has become a big player in what she herself calls the “golden age of comedy for women.” She is being mentioned on countless lists of “Comics to Watch” and is finding her way onto the silver screen. Through all that, Cummings has maintained a cool and amiable demeanor and kept herself from pretending – perhaps her most impressive and attractive attribute as an entertainer.

But then again, none of this really matters. All that does matter is whether or not Whitney Cummings is funny.