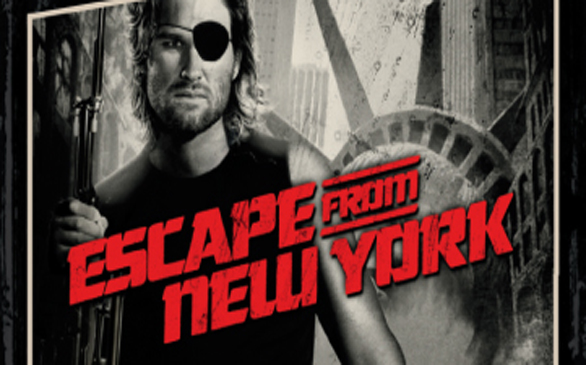 Blu Notes: John Carpenter’s classic Escape from New York takes place in a future (1997) where Manhattan is one big prison. When the President’s plane goes down inside, Snake Plissken (Kurt Russell), convicted bank robber and one-man army, is coerced into navigating the deadly wasteland and rescuing the President. Rounding out one of the coolest casts ever are Lee Van Cleef, Isaac Hayes, Ernest Borgnine and Donald Pleasence.

Kate Winslet, Gérard Depardieu, Jack Lemmon and Julie Christie are just a few of the all-star cast members Kenneth Branagh assembled for his stunning 65mm unedited adaptation of Hamlet. Set in the 19th century with lavish production design, it’s one of the finest film adaptations of the Bard’s work.

Before he was a megastar, Brad Pitt was a redneck serial killer in Kalifornia. A pre-“X-Files” David Duchovny plays Brian Kessler, a journalist touring sites of serial killer murders. Along the way, he picks up two hitchhikers, Early Grayce (Pitt) and his girlfriend Adele (Juliette Lewis). But as the trip progresses, Early becomes increasingly unhinged and dangerous.

The Idiotbox: One of the best dramas on TV, “Friday Night Lights,” returns for The Fourth Season. Set in a small Texas town where high school football is everything, the show follows the lives of several students as well as the football coach and his wife, the principal.

Another small-town ensemble drama, “One Tree Hill,” returns for The Complete Seventh Season. The show centers on two half-brothers from very different upbringings as they navigate tumultuous romances and familial tensions.

Everyone’s favorite serial killer returns in Dexter: The Fourth Season. Now a father, Dexter gets further in over his head with his façade of normalcy. Meanwhile, John Lithgow joins the cast as this season’s nemesis, the Trinity Killer.

Action: When a suitcase full of money falls on his car, Sam (Thor’s Chris Hemsworth) thinks he’s solved all of his problems. But suitcases of money are never without their strings – namely, Pyke (Sean Bean), a relentless British criminal. Now, Sam and his wife have to do whatever it takes to pay back every cent in Ca$h.

South Korea’s The Good, the Bad, the Weird, an over-the-top genre pastiche in the Tarantino tradition, infuses the Spaghetti Western with martial arts for an entertaining blend.

Funny Business: Nature decides to fight back in Furry Vengeance. Brendan Fraser stars as a housing developer who finds himself in a war with the local wildlife. The always hilarious Ken Jeong (“Community”) and Brooke Shields co-star.

When Katie (Lucy Hale) pledges an unpopular sorority over her mother’s Delta house, she becomes a campus pariah and ignites a catty fight to the finish in Sorority Wars.

Stranger Than Fiction: Spanning 5,000 years, historian Simon Schama’s epic documentary series A History of Britain gets a new Special Edition release. Schama traces the history of the island from the Stone Age through the 20th Century for a captivating 15-episode story. This new edition features a 30-minute making of and an interview with Schama.

From the Wright brothers to the moon landing, Days That Shook the World: The Complete Series brings to life the moments that have changed the world forever. Using archival footage, eyewitness accounts and dramatic recreations, this six-disc set transports you to those watershed moments.