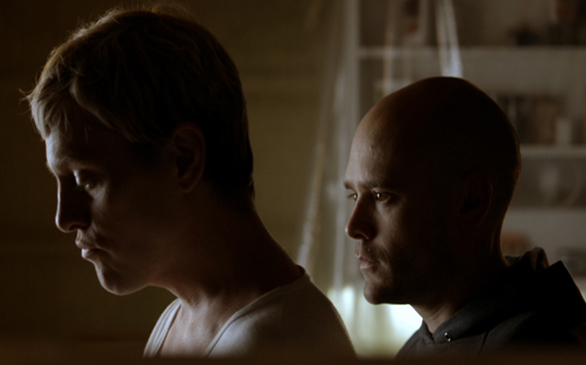 The title originally threw me off. I had seen another film just a couple months ago with the same name, but the difference between the two films was everything. The first is by American writer-director Will Canon about a fraternity pledge night that goes terribly wrong. Starring some recognizable faces like Lou Taylor Pucci and Trevor Morgan, I could understand the drama centered around college Greek life.

This other film by the name of Brotherhood is from Denmark and also depicts a decent amount of violence. However, this one is a story of forbidden love, of unpopular beliefs and of tough choices. Lars (Thure Lindhardt) is our protagonist who is denied a promotion to sergeant when rumors start spreading that he behaves inappropriately with some of his men. After leaving the army, Lars starts running with a small group of neo-Nazis led by a guy simply known as “Fatso.”

Lars is initially hesitant about joining the cult-like group, but frustration with his leave of absence from the army and with his parents convinces him to join the band of brothers. Despite the disapproving attitude of his right-hand man Jimmy (David Dencik), Fatso sees Lars’ intelligence and ability for leadership and decides to promote him to an A member, even though it should have gone to another, more experienced member.

To get out of his parents’ home, Lars temporarily moves into the remote summer cottage belonging to the board chairman. Jimmy and Lars originally butt heads, but their mutual attraction overshadows any misgivings they originally may have had. Their love is both emotional as well as incredibly physical; they spend days of fixing up the house and nights together in bed.

The clandestine couple is constantly threatened by the group’s nightly attacks, prejudiced ideology and increasingly dangerous views on homosexuality. Caught between their allegiance to their neo-Nazi brethren and their illegal relationship, Lars and Jimmy must choose one over the other before they destroy each other.

The film is not perfect. There is a certain neglect for the free will of the characters who all seem stern and focused but lacking the ability to make an honest and individual decision. Its intentions, however, are honest. Its dark color palette throughout adds to the intensified mood and dark acting that allows the viewer to support the ambitions of the brainwashing group and to sympathize with the suppressed couple and their forbidden lust.