Baseball in the Age of the Apocalypse: Part 2 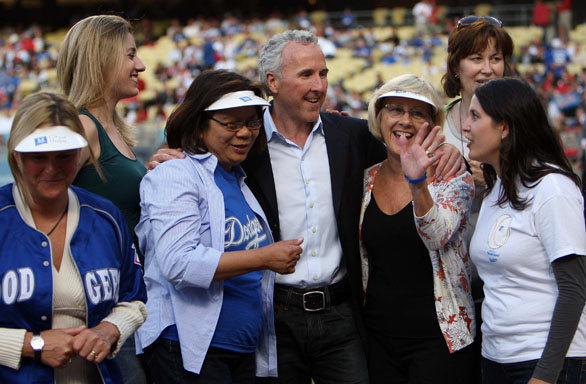 When Dodger owners Frank and Jamie McCourt announced their intentions to divorce last October, it signaled not only the end of a marriage but the final demise of the fantasy world they had constructed. For many Dodger fans, the separation and ensuing argument over ownership was profoundly disillusioning. The same couple who had promised so much in the way of a Dodger renaissance would now be focusing their energies on gauging one another for whatever they could get. Most alarming is the cold chill of it all.

After 30 years of marriage and four children they now take it to court and argue over signatures on papers. All families fight about money but few to the tune of $700 million. The argument has direct implications on the city’s beloved baseball team and their ballpark. What’s more is the sense of betrayal on the part of fans who were asked by the McCourts to imagine a brilliant future while the present turns more and more distasteful.

In the previous installment of this article, I talked about the capacity of baseball to offer us moments of spiritual uplift. The game itself contains a balance between stillness and sudden action, which serve as a metaphor for our lives. The fierceness of a pitcher’s delivery, the desperation of a would-be base stealer, the prayer of a watched ball as it sails into the outfield each provides glimpses into our own humanity. The occasion of going to a game and watching the action unfold offers the viewer an authentic experience. It is for such reasons that we love the game and hold it sacred.

Dodger Stadium has been regarded as one of the premier ballparks in the country for watching baseball. Its midcentury modernist design emphasizes clear sightlines and symmetrical dimensions. The surrounding hills with trees and seasonal flowers calls to mind America’s rural past and a connection to nature.

For most of the stadium’s history, advertising amounted to a few 76 logos. In the past 20 years, however, Dodger fans saw a steady encroachment of more and more advertising in their ballpark. Beginning in the latter days of the O’Malley era and gaining momentum under Fox News Corp., it grew ever more pervasive under the McCourts so that now to attend a game is to be bombarded with tens of thousands of images of advertising.

Despite all of this, the improved performance of the team under the McCourts made many fans hopeful. They were willing to listen when the grand stadium renovation plan, the “Next 50” was unveiled two years ago. The plans, which can still be viewed on the team’s Web site, called for the development of the stadium parking lot to include landscaped plazas, sports bars, merchandise boutiques, a museum of Dodger history and an enormous patio above the upper deck with views of the stadium and the surrounding city. The proposal also called for the unpaving of 15 acres of parking space to make room for the development. Included in the proposal was an “environmental initiative” that planned for increased recycling, energy-efficient lighting, water-saving technologies and storm water treatment and reduction.

What is absent from the “Next 50” proposal is a consideration of what the world will be like in 50 years time. Nor is there mention of what has transpired in the last 50 years. This could be useful in determining certain trends. In the 50 years since Dodger Stadium was constructed, the world’s population has used up more of the earth’s resources than all human generations before it, a hole has grown in the ozone layer, the amount of greenhouse gases in the atmosphere has grown exponentially and there is unprecedented species extinction, including a massive reduction of the ocean’s phytoplankton attributed to global warming.

What does all this have to do with baseball? Don’t we go to the ballpark to escape the problems of our world? If it were ever the case, it is no longer possible. The game of baseball has always reflected American life. These days that culture is defined by rampant consumerism and the two hundred billion dollar advertising industry that propels it. Advertising preys on our deepest emotions and insecurities. Its function is to constantly reinforce the idea that happiness and security are accomplished through consumption. This in turn requires greater production, which then exacts a greater toll on the natural environment.

Frank and Jamie McCourt are themselves tragic victims of the consumer culture that enriched their pocket books in the form of advertising revenue. With their multiple mansions, expensive clothing and $150,000 annual haircut budget, they lost touch with the very values they once championed, such as family and community life.

The game of baseball actually predates the rise of the advertising industry that followed in the footsteps of the industrial revolution. Originally played on the outskirts of towns in open pastures, the game remains fundamentally the same as it was 150 years ago. A game of infinite dramatic possibilities, it excites the imagination and energizes our spirit. Great moments in baseball have the quality of a spiritual reckoning, moments of heroism or human frailty that give us access to our own humanity. The challenges of our generation are severe and highly personal. It is literally up to us to reverse the perilous path of our civilization, and unless we can reach into our inner soul, we don’t stand a chance.

Baseball
For Dodgers this coming offseason, team icons are among those in free-agent flux
872 views

Baseball
How the Dodgers and Rays match up position by position in the World Series
1,023 views