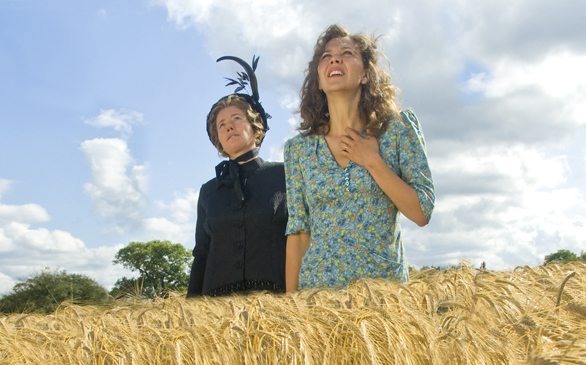 In the sequel to 2005’s Nanny McPhee, Emma Thompson writes and presides over the story as the titular character, aiding a farming family during a crisis. Isabel (Maggie Gyllenhaal), a mother of three children living through wartime in the watercolor countryside, struggles to keep her farm running while her husband (Ewan McGregor) is away fighting. (The war is never specified, but the styling and technology make it seem like WWII.)

On the very day that she needs to sell her prized piglets to make the payments on the sole tractor on her farm, Isabel’s sister’s kids from the city arrive to stay at the farm and clash with their country cousins. To top it off, her brother-in-law Phil (played with great fun by Notting Hill’s Rhys Ifans) tries to sabotage the whole plan because he has gambling debts to pay; he spends the entirety of the film attempting in various ways to get Isabel to sign away the farm. But more importantly, the children are misbehaving!

Enter Nanny McPhee, the magical caretaker who grows to look more like Thompson (and thus more beautiful) as the children learn the lessons she has set out for them. Like the first film, the sequel is structured around these lessons, and they are checked off as the film goes on. Yet unlike the first film, McPhee’s magic isn’t dwelled upon, allowing the story to really be about the family. Also, the backdrop of war raises the stakes. What will the family do if the farm is lost and the soldier father similarly lost?

Although the film uses far too much bathroom humor, which in a way isn’t necessary now in children’s films (see any Pixar film), it was a relief to be spared all the tiresome pop culture references that bog down kid’s movies of the moment. But where McPhee really shines is in its use of its prestigious adult cast, rounded out by Maggie Smith, Ralph Fiennes and Bill Bailey. (Actually, the funniest gross-out joke involves Smith and a cow pie.) Being a kid’s movie, the adults are able to just play with their goofy, albeit standard, British characters.