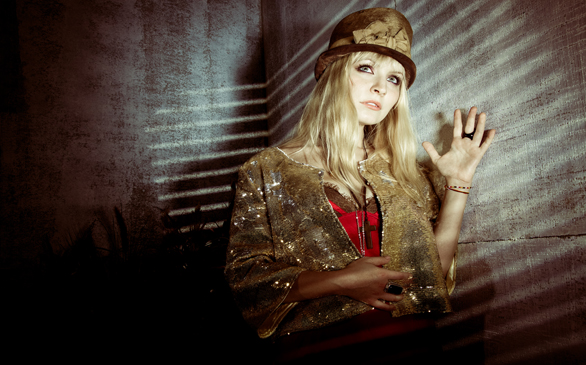 Lindsey Haun likes cowboys, but won’t be singing country. She loves to eat, but she’s on a juice fast. She’ll melt you with a smile, and she’ll melt you with her rock band in a sweaty crowd-filled venue. She has a successful acting career, but she’s getting very excited about her new record to debut next month. Neon Gods is a deeply emotional album with a psychologically tapping message that reaches a bit into the dark side.

Haun walks into the photo studio with a huge smile on her face and a giant rack of amazing vintage clothes, hats and shoes.

“I’m a collector,” she says with a wink and a smile.

Haun has been recently added to the cast of the hit series “True Blood,” and in the midst of her busy schedule, she’s pulling together this new record. Her band – the Haun Solo Project – often holds residencies in Los Angeles at the Cat Club, and according to an intuitive fan, sounds like a mix between Joan Jett and Andrew Lloyd Webber. Another fan describes it more like Queen and Fiona Apple mixed with Tool.

“We’re a little bit dramatic but also have that rebellious, classical sense,” Haun describes. “That fan was sorta dead-on! My grandfather was an opera singer so I’ve trained in jazz and opera and rock and pop. I need to incorporate a theremin into the live show because I sing a lot of the notes on the record, but need to get a theremin in order to do it in a venue.”

After being on a label and touring nationwide with Toby Keith, Haun let it all go to pursue a project that was not only hers, but also her own dream.

“When I originally signed the deal with Show Dog records, Toby’s label, we were going to promote my song as part of a country soundtrack for the film Broken Bridges, and then move on to me doing my stuff,” she says. “In the end a lot people said to me, ‘If you’re walking away you’d be walking away from these 40,000 people calling your name. Can you do that?’ A lot of people were hoping that would seduce me into the life, and it didn’t. I mean I grew up in L.A. I was in a hard rock band for five years, and country just wasn’t who I am. When I was in Nashville I thought about how many blonde blue-eyed girls there were that were so talented and realized I was living someone else’s dream. I kept thinking, ‘What am I doing? I’m not even appreciating this.’ I didn’t want to lie to my audience, so I left.”

Talking about how the record was made, Haun describes how she locked herself in a cabin for a week and picked up a pen and a guitar and sort of emotionally purged this record into being after a tough break-up. The record, however, isn’t exactly an emo sad song soundtrack, but it talks about bigger things in life “like leaving a label, figuring out who you are, what you wanna do,” she offers, but “within the context of a relationship. I’ve always wanted to be the healing event in people’s lives like some of my favorite artists have been for me.”

The title of the album Neon Gods comes from a Simon & Garfunkel lyric from their song “The Sound of Silence.” One of the lines from the song says, “All the people bowed and prayed to the neon gods they made.” Haun interprets this lyric in the context of the material things of this world that people worship or are obsessed with.