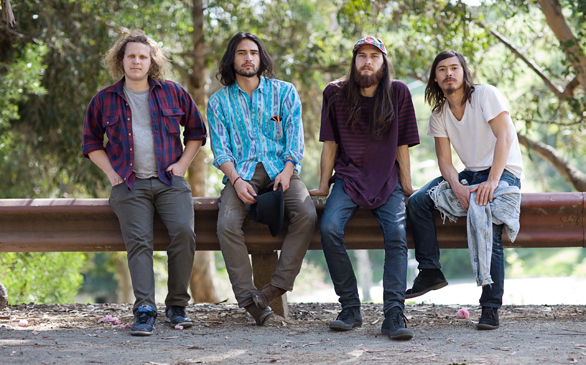 Chief’s story is truly a tale of two cities. Although brothers Danny (guitar/vocals) and Michael (drums) Fujikawa, vocalist Evan Koga and bassist Mike Moonves are all native Angelenos, they didn’t actually begin their musical partnership until their paths crossed as students at New York University. As they honed their craft on NYC stages, the City of Angels’ influence could be heard in their songs that hearken back to Love, the Beach Boys and Neil Young. The foursome returned to the West Coast to write and record their debut, Modern Rituals, and Campus Circle caught up with Moonves to uncover some of his L.A. favorites.

Besides your home, where is the first place you head to when you get back from tour?

Moonves: Depending on what time we get back from a tour, we might head to a couple different places. If it’s at night, we’ll probably head over to the Darkroom [7302 Melrose Ave., Los Angeles] to throw some darts and hang out. If it’s during the day, cruising over to a homie’s house is generally the move.

What did you miss most about Los Angeles when you were in New York?

Everyone can obviously comment on the weather. There’s no question that that’s always gonna be there, but it’s definitely not what I miss most. What I love about L.A. is being able to not be surrounded by people all the time. When you leave your house in N.Y., you’re heading out onto a populated city block. In L.A., you’re most likely jumping in your car and cruising wherever you’re cruising in peace. I love traffic a lot of the time. It’s a chance to breathe.

Do you have a special place to go for inspiration when you’re writing your songs?

The inspiration is everywhere, but the beach is especially inspiring. When I’m out there, I try not to turn around and see the cars on the Pacific Coast Highway and think about California in its golden years. I picture tribes building fires on the beach and animals running free, and it’s really incredible.

What was the first concert you ever attended in L.A.?

My first concert I ever went to was No Doubt at the Universal Amphitheatre [now Gibson Amphitheatre]. I was about 7 years old and went with my dad, my sister and a few of her friends. I remember enjoying it for a while, but then getting flustered about the noise level and the fact that I was standing on my chair and still couldn’t see a damn thing. I cried until my dad took me home. I still have a strange distaste for No Doubt to this day.

Where do you like to go to check out other bands now?

For me, seeing an outdoors show is always the best. The Greek Theatre and Hollywood Bowl are both so beautiful. Watching a great show with the moonlight above you is a majestic experience, which is why I must also show some love to the Empire Polo Field in Indio (the site for Coachella). However, with a large amount of the bands that we listen to, they’re not getting gigs at the Greek or at the Bowl, so going to see a show at the Echo or Troubadour is top of the line for the smaller venues, and they do a great job at those spots.

Do you have a favorite venue in the city to play shows at?

I think it’s gonna have to be the Troubadour. It’s a place with so much history and also a place that hasn’t diminished in its popularity and clout like the Whisky and Roxy have. I’ve also got personal love for the Troub because I played my first acoustic show there when I was in high school and had an incredible show. Every time Chief plays there, I get to hang with my 15-year-old self and he gives me props.

What is your most treasured memory from playing a show in L.A. thus far?

I’m gonna go with the night that we co-headlined the Troubadour with our good friends Dawes a couple years ago. Our bands both played incredible sets that night, and it was really awesome because it was entirely a team effort. We were still living in New York and would just come back to L.A. to play shows during the summer, so we didn’t really have a practice space. Dawes had this great band house in North Hills (which is what they ended up naming their album) and insisted we come and use the house and their gear to rehearse while we were in town. There was this great bond happening with the guys, because we’d be hearing each other’s sets like twice a day and then just hang out. Dawes, [who] has always been great at covering jams, wanted to do something really special for the end of the show, and they decided on Joe Cocker’s version of “With a Little Help From My Friends” and wanted to do it with us. The night of the show, Taylor’s (Goldsmith) dad, Lenny, came up and did all the harmonies with us, and there was this crazy love in the air. The audience loved it, and it was about as much fun as two bands could have with each other. Great memory.

Do you have a favorite instrument shop or place to buy gear?

My favorite shop has to be Truetone Music [714 Santa Monica Blvd., Santa Monica]. I’ve been going there since I was 14, and they’ve always been really groovy and know what they’re talking about. They got a good stock of old and new gear and do good repairs. I bought my black ’75 P-bass there.

Right now, I’m freaking out about Al Wazir Chicken [6051 Hollywood Blvd., Ste. 104, Hollywood]. It’s right near Danny’s and my house, and the chicken there is unlike anything else. My favorite dish is the No. 1, which is the standard chicken platter. Comes with great hummus and garlic sauce as well as a little salad, rice and pita. This place kicks the shit out of Zankou Chicken, even though Zankou is really good. Wazir is just the best. Check it out! You won’t be disappointed.

In all honesty, I go on one shopping day every two years with my sister. She’s a stylist and knows what kind of style I vibe with. So, I get a bunch of gear that one day and then I pretty much cruise to Kmart or Ross to get plain T-shirts, boxers and socks for the rest of the time. I’m a simple man.

What is your favorite bar to hang out with friends?

My favorite bar is probably the Darkroom, because we love throwing darts in our crew. There’s a great smoking section, and we have good homies that work there, which makes it all in all a comfortable spot to hang. However, I’m also a serious billiardsman, and I try to shoot pool a couple times a week. My pool hall is called Penthouse Billiards [1810 Wilcox Ave, Hollywood]. The joint is never full, and you can feel the old Hollywood vibe of it. The rates are cheap, the beer’s cheap and the jukebox is full of great Mexican pop music, which I’m growing to understand and love. Also, on Sundays, Leila the bartender sometimes brings in some Mexican food she cooks at home and serves it out to anyone that wants any. You don’t get that everywhere.