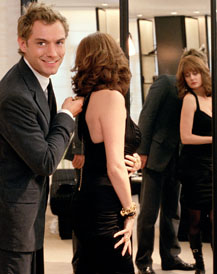 Alfie the man is all about style and charm. So is Alfie the movie.

The 1966 original propelled Michael Caine to stardom and enjoyed a long life in moviegoers’ memories. Its raunchy humor carried tints of darkness and rueful melancholy.

The last four decades have witnessed a sexual revolution and a new set of social mores. It would be impossible for contemporary director/co-screenwriter Charles Shyer and co-writer Elaine Pope to duplicate the mood of the original, with its haunting abortion scene, and they haven’t attempted to try. The new Alfie is jolly and humorous with only occasional reflective moments. Its tone is less reminiscent of its nominal predecessor than of Hal Ashby’s 1975 Shampoo, with Warren Beatty as a happy hairdresser.

Jude Law gives a rich and saucy performance as a Cockney limousine driver who, as the screenplay notes, gladly delivers "full service." The film’s color palette is also bright and cheeky. New York, where Law’s Alfie now lives, looks like a haven of vibrant opportunity, and Alfie believes in taking advantage of all opportunities.

Two of his most memorable opportunities are Susan Sarandon and Sienna Miller, arriving late in the film’s action to provide him with warmth during a chilly holiday season. Sarandon, who seems incapable of a bad performance, is delightfully forthcoming as a successful businesswoman who can give as good as she gets. Miller oozes sexuality as a party animal whose psychological makeup recalls that of Vanilla Sky’s Cameron Diaz. For those who care, we dutifully report that Miller and Law are an off-screen couple as well.

Marisa Tomei poignantly provides a sobering note as a single mother who longs to settle down but will only take so much from her wandering lothario. Jane Krakowski, remembered by Broadway fans for her lauded performance in "Nine," gives a spirited performance as a bored housewife who hasn’t quite reached the point of desperation.

Alfie’s relationship with the stunning Nia Long most severely tests his never-rigid moral code. Long, you see, is the fiancee of Alfie’s co-worker and lone male friend, played with righteous anger by Omar Epps. The result of her one-night liaison with Alfie spurs the screenplay’s rare censorious episode.

Like its title character, the movie doesn’t strive for depth. But it’s stylish and, yes, also charming.