UCLA’s Ad Team: Putting the Creative Mind to the Test 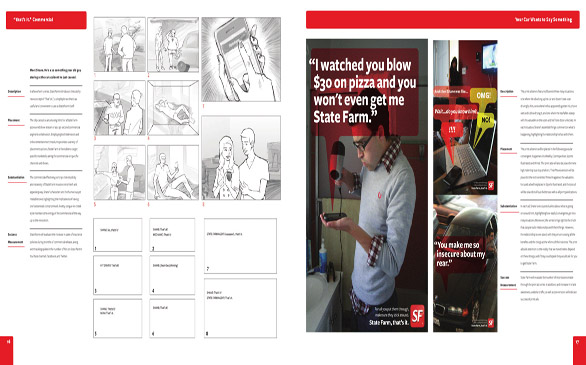 Every year, over 140 schools across the nation set up makeshift advertising agencies on their college campuses to compete in the American Advertising Federation’s National Student Advertising Competition (NSAC). Companies like AOL, Coca-Cola and this year’s corporate sponsor, State Farm, outline a case study about their product. The students must research and create comprehensive advertising and communications solutions to pitch to a panel of industry judges. If this sounds intense, then welcome to the world of NSAC, where stress runs high and the fiercest competition cuts deep with witty slogans and glossy-paged proposal books.

For UCLA’s Ad Team, who came in second place in this year’s district competition, their taste for first place in the overall competition hasn’t been satisfied since 1999. However, Karla Liu, the 2009-2010 Ad Team Supervisor/team leader, has found her final year in Ad Team to be especially rewarding.

Citing it as “one of the best kept secrets on campus,” it was because of her three-year commitment with the team that she was able to gain a job immediately after graduating this June. The account supervisor who currently works for ad agency Daily Ideas talks about UCLA’s process of attack going into this year’s competition and how creativity, planning and research are at the heart of any advertising initiative.

What makes for a strong advertising campaign?

Karla Liu: A strong campaign is one where each commercial or print ad lives on its own and ties back to the larger campaign as a whole. It has to be engaging as an individual piece of art, but at the end of the day, it has to be cohesive with the entire campaign, otherwise your overall message gets lost.

What was your idea for State Farm?

“That’s it.” That was our tagline for everything. In research, our target market was 18- to 24-year-olds; our target didn’t care and was apathetic toward insurance because it was so complex. They needed an easy, feasible solution with a company that doesn’t give empty promises. “That’s it.” was the tagline that brought that message to life.

Our print ads consisted of the idea: If our cars and our things can talk to us, what would they say? We learned through our research that people develop relationships with their belongings, especially young people because they don’t have a lot of things. For our print commercial, the only dialogue was “that’s it” but in different contexts.

“That’s it.” means finality. It means a solution.It means a 100 percent guarantee of service.

What are the aspects of Ad Team, and how do they all come together?

Our research team finds the problem: Our demographic thinks insurance is so complex that they don’t want to get into it. They don’t want to care about it because it’s too hard to care about. That’s the problem, so we create a solution. That leads to a positioning statement. The planning group comes up with a strategy that this is the direction we want to go with the campaign – usually a creative brief that’s about one page long – and they explain that to the creatives on the team who come up with print ads, commercials and a general theme, and then the designers take that and turn it into art.

What is something important for a creative person to know when joining an advertising team?

What’s really important with creative is that they’re willing to listen to the “research people” and the “ideas people” to really understand the concept of the ad. I think a lot of creatives get caught up in the idea that “I’m so creative” and “I have my interpretation in what I feel the ad should be.” A lot of people don’t realize how much strategy and how much thinking goes into one print ad. The message gets lost, and the art comes out different. It may be something tasteful and artsy but does not convey the message at all. It all ties back to what we know about the brand, what we know about the product and what the product actually does. It also ties back to what the target likes.

Now that you’ve graduated, how do you hope UCLA’s Ad Team can better improve against the competition?

It’s really unique because we’re the only team in our region competing that’s totally student run. We do everything ourselves. Our advisor didn’t even come to competition with us. We funded ourselves. Everything we know about advertising is through what our supervisors and members know.

In advertising, it’s not just the creative. It’s about media placement, marketing and business decisions, and that really comes with knowledge and experience that as a student I’ve gained through internship. We need someone who has worked in media planning in an advertising agency to know what to do, and that’s something we lack.

Has this year’s Ad Team received any special recognition?

One of our creatives quit in the beginning of the year. We were really short staffed this year with only two creatives that were really capable in design Illustrator and Photoshop. Our entire book and all of our presentation, everything was created by two people within the span of one week. I really have to give it up to them; they are as talented as they come.

How has Ad Team helped your post-grad life?

It’s so helpful for your career. It helped shape my college experience and helped me to get my first internship in college because the people that have been on the team more than one year (the veterans) help recommend the younger people to internships, and I’ve helped the people below me get internships.