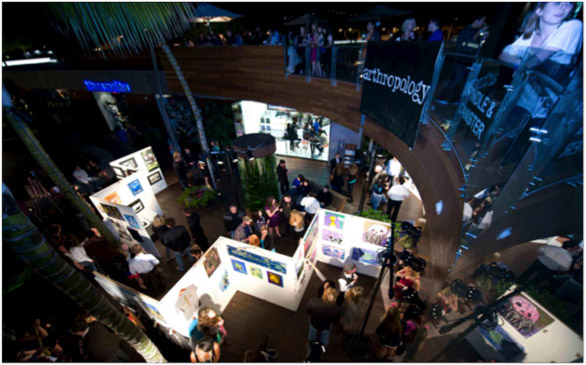 Within the massive liberal arts campus of the University of Southern California, the general public often overlooks the contributions of artists and designers in the fields of photography, painting and sculpture for their more famous artistic cousins at the prestigious USC School of Cinematic Arts.

This isn’t only true for USC, but for a lot of liberal arts colleges where fine arts students are often wanting for a place to call their own. Even at Pepperdine, art majors are the minority.

Art societies, whether created professionally or by students, are organizations that allow artists to network, to build their skills professionally and showcase their creativity to the public. Specifically USC’s AIGA (American Institute of Graphic Arts), one of the oldest professional organizations for designers, and Pepperdine’s student-initiated Art Rush share the common brushstroke of holding large exhibitions and events their whole campus can enjoy.

Pepperdine’s outgoing Arts Chair for the Student Programming Board (SPB), Susan Doe, has worked closely with Art Rush in the execution and planning of their events. According to Doe, the mission of the club is to create and build an art community on Pepperdine’s campus.

“Our art program is pretty small at Pepperdine, with about 40 art majors total, meaning a graduating class of about 10 each year,” she says.

Created three years ago, their Facebook page poses a challenge for the larger Pepperdine community as a whole stating: “This group is not for watchers: this group seeks active participation from its audience. It is in group interaction that the collective collaboration becomes a viable force in supporting artists and those interested in art.”

Doe says, “The cool thing about watching how Art Rush came to be is how much of it was grassroots and came from the students. Since the art program is so small, the students did not have many opportunities to exhibit their works. Not only does that limit artists from sharing artwork they create, it also limits the community from exposure to the creative world.”

Last year, the group was responsible for a range of exhibitions, including a recent show in March titled ARThropology: The Study of Beautiful Things held at the Malibu Lumber Yard. The show included 33 artists – ranging from Pepperdine students, alumnus, employees, faculty and local professional artists – specializing in various media forms such as painting, film and jewelry.

“We usually have a combination of musicians and a DJ to create a lively atmosphere. Attendance ranges from 500 to 1,000 per show,” says Doe.

As a recent graduate double majoring in Art and Business Administration, Doe explains, “I feel very fortunate to have a business side and a creative side, but I consider myself to be an artist first.”

Doe’s experience as a double major is common for many art majors in a liberal arts setting, says AIGA USC faculty advisor and AIGA Los Angeles education director Haven Lin-Kirk. Unlike the completely student-run Art Rush, art and design students are able to find a creative community in AIGA, one of the oldest professional organizations for designers with established chapters on numerous college campuses in major U.S. cities.

“For our campus, a lot of students are double majors and minors. Again it goes back to a liberal arts education as opposed to an art school or design school education. If you go to an art school, everyone around you is an artist. It’s easy to find your peers. At a school like ’SC, a handful of people kind of know one another. They need someplace to go to network,” says Lin-Kirk, who has been a part of AIGA for 15 years.

Students can participate in AIGA in different forms, but to receive the exclusive perks that the national organization has to offer students are encouraged to apply for a membership, which includes critiques of their portfolios from around 45 to 70 reviewers in the industry as a way to help students as they transition to the real world.

Lin-Kirk explains that schools like UCLA and USC’s approach to art is on a much more disciplinary nature, including problem solving and theory.

“At USC, there’s a lot of opportunity, but we are worlds apart from the bigger network of designers in Los Angeles. Our program is not necessarily vocational based,” she says.

The need for a type of real-world, hands-on approach stems from AIGA’s sponsorship of events and exhibitions like speaker series, film screenings and fundraisers, including an event where select students and faculty decorate ceramic mugs.

Though AIGA chapters vary depending on the type of campus they serve, AIGA at USC has the advantage of attracting big-name speakers to the USC campus. The reason for this is, as Lin-Kirk states, “’SC is a huge campus, we get tons of speakers. Even if we didn’t offer design speakers, Annenberg would be offering it.”

Roski + AIGA USC have hosted film screenings featuring the culture of modern graphic artists, including the award-winning Beautiful Losers about a group of renegade artists utilizing D.I.Y. (Do it yourself) aesthetics and street art.

The group presents its own weekly special projects, including critiques of each other’s current work and preparation for Emerge, an annual design forum where students all across graphic design programs in Los Angeles are able to display their art and designs. For members, this is an opportunity to have their work shown to their peers and industry professionals.

Unlike Art Rush, AIGA gears designers for a career, however, both art societies foster a community where art is explored and shared, whether it’s for a career or sheer self-fulfillment.

As Lin-Kirk elaborates, “At the end of the day, if you’ve made something that touched someone or sent a message, whether a painting, clothing or product, that’s kind of the whole point of being a creative person and why people go into the creative field.”