LMU Student Art Gallery Co-op: A Gallery of Their Own 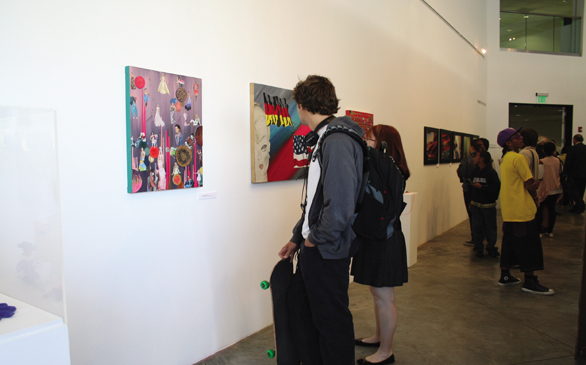 Did you know that organizing a museum gallery is an exercise in manipulating the elements around you: moving and creating makeshift walls, controlling the glow and glimmer of lights?

Organizing a gallery requires a talented eye where the artwork, light and space come together fluidly. It all can seem very Zen.

However, before the opening of an art show and before walking into a building filled with order and beauty, there’s a team of individuals racking their brains organizing proposals and publicity, working with artists and faculty and installing and uninstalling different elements of the gallery space.

At Loyola Marymount University, a group of students have a whole gallery under their control because it’s completely student-run.

They call themselves the LMU Student Art Gallery Cooperative.

In its second year, the students have an enormous gallery at their disposal.

“We are the only student-run art gallery in L.A. that’s totally managed by students. Our space is very unique because it was built for students,” says Justin Manzano who graduated in May this year and is the cooperative’s outgoing president.

“We’re trying to give the students the experience of what it would be like to manage a professional gallery,” says Barbara Busse, dean of the College of Communication and Fine Arts. “There is a long tradition in art schools of having a gallery that students can manage.”

To begin with, before even starting to put together a show, the group is responsible for seeking submissions from various student groups for use of the space.

“We wanted to have the gallery well publicized on campus and to bring together art history students who want to focus more on curating as well as art students who want to showcase their work. Publicizing it across L.A. and working with other groups was part of our big push this [past] year,” says Manzano.

Proposals came from LMU students, faculty and even outside organizations like AIGA, and was the cooperative’s job to evaluate each proposal.

“It was a cooperative effort with a small group of students who are like an executive board, and we made decisions on student proposals we felt were well-executed,” says Manzano.

Afterward, the cooperative would help to publicize and promote shows and events whether through flyering, online message boards or through partners like the Getty, Red Bull and Nike. Each show would run approximately three weeks to a month and would range from solo shows, curated exhibitions and various artist showcases, like LMU’s Senior Thesis Showcase, considered one of the cooperative’s highlighted events.

Another notable gallery feature was a weeklong performance piece highlighting the theme of art’s time and place by Manzano and other cooperative members.

“It was a good integration of breaking down the idea that art can passively be hung on walls or pedestals,” Manzano states. “The hardest part of the job is getting everyone’s schedules together and making sure people show up to things because no one actually got paid for it. It was an extra effort to add to your class schedule.”

“There’s a lot of things that go on behind the scenes in art shows that people don’t know about,” agrees incoming president and third-year art student Kelsey Fugere. “It takes a whole crew to install and uninstall a show. It takes people to advertise and publicize a show and send out news releases.”

Even the aesthetics of a gallery layout needed to be carefully thought out.

“The hardest part is working with the space and making it cohesive with what you’re trying to represent. It’s a beautiful building, but it’s not the best designed space in terms of gallery space, just the way the lighting comes in,” says Fugere.

Manzano further explains, “It’s the interaction between a student’s art work so that when you walk into a space, there is some sort of direction with the objects and the art inside. They aren’t just thrown together and put on the wall, it’s more of a cohesive environment where one piece interacts with another across the way. Everything is the aesthetics of having enough space, so people can walk through comfortably.”

In terms of museum curating, which is more like producing a whole exhibit with administrative planning and paperwork, the cooperative was directly involved with an LMU gallery class and art students across campus.

“This year we were lucky to have a few art history students that were looking toward curating and sort of working with the artists. Some of the younger ones needed more guidance since this was literally the first time they showcased work in a public setting, ” says Manzano.

As a student-led initiative, there’s a sense of the older generation teaching the younger generation “the way of the gallery.” Older art history majors often help out freshman and sophomore first-time curators, while older seniors provide the training for younger cooperative members to take over after they graduate.

Despite providing an excellent leadership role, the cooperative presented a sense of community for Fugere, “I wanted to be involved in the art community on campus, and I thought the gallery was a good way to do that because that’s where all the art students hang out and meet each other.”

Being part of the organization also built anticipation for Fugere’s own art exhibition in the annual Senior Thesis Showcase.

“It was cool to see what all the seniors had to show for themselves. It was something to look forward to in the future, to think about the thesis of my work,” Fugere shares.

As a recent graduate, Manzano recalls what he learned being in charge of the cooperative: “I got the whole understanding of working with different artists, and I learned how frustrating it can be working with uptight people or people who just don’t care, which is all part of the experience.” Also adding, “I learned how to properly hang artwork, which is helpful for your house.”