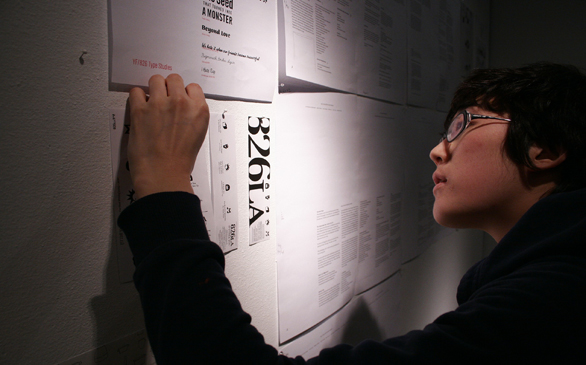 Let’s rewrite the idiom of the isolated artist living and dying alone. For this story is about art, friendships, imagination and enterprise. These are friends, and more importantly a set of Yello, Friends! as they call themselves; created out of pure whimsy after they began illustrating and designing a literary magazine to house an array of fantastical and frightful fantasy stories created by the kids at the 826LA tutoring center.

The Yello, Friends! (yellofriends.com) are a ragtag team of designers and illustrators who together pooled their time, money and resources to fulfill their passions for art and design, and more importantly, to do it together. After meeting at Pasadena’s Art Center College of Design in the class of infamous copy and typography instructor Lisa Wagner, recent graduates Pei-Jeane Chen, Carlo Llacar and Patrick Leung had ideas to expand their talents into something tangible and real outside of the classroom.

Leung’s girlfriend, Saejean Oh, an art student as well, heard about the group’s plan and wanted in, saying, “I heard from Pat all the things that they were doing [in the class], and I thought, ‘Oh my God, I wish I would have taken it.’ I thought Pat had this big plan to do a project with Carlo, but it turns out they just talked about it a couple of times. And I really wanted to be a part of this cool group of kids.”

Armed with two designers and two illustrators, the group was hoping to contribute something or anything to make their last term at art school worthwhile, and it was sheer coincidence that their intentions would catch the eye of Director of Education Julius Diaz Panoriñgan at 826LA, because it was literally immediately after walking into the tutoring center that their first art project together was born.

“Initially, I thought we would be able to come up with a project, because I know people go into the tutoring center and propose projects to do with kids, but after talking with Julius, he gave us a good idea of doing a ‘best of’ issue. We didn’t have any big plans walking in, we were totally open,” says Leung.

The “best of” issue would center around short stories and poems written by the children at 826LA, a non-profit organization dedicated to instilling creative writing skills to students 6 to 18 years old. Stories by the kids were collected and laid out in a type of literary magazine format completely hand-drawn and designed by Yello, Friends!, including two full-length posters and illustration styles that included a play on textures and the use of Photoshop.

Leung explains the process of drawing one piece with Oh: “I would just draw on something, and pass it to her and she would draw on it. We would draw in completely different ways and then meet stylistically in the middle.”

The illustrations have a very surreal, whimsical feeling that is as much about the narratives depicted by the children’s stories as they are of each Yello, Friends! personality. One poster is like a street map of Los Angeles from Echo Park to Venice Beach littered with sights of werewolves, robots and zombies from the children’s stories.

“It’s funny too, we finally have a place for all of our inside jokes,” says Oh, who points to a drawing of their “Yello house,” covered in its signature color with pages of layout designs hanging on its walls. Outside are the Yello, Friends! in miniature dancing in a sea of pages.

In another part of the picture is Lisa Wagner, the teacher who inspired the group’s name by her study of newspapers written completely on yellow paper. Besides their instructor, Art Center College also provided the group with studio space called “The Chile Room,” named after the classroom’s daytime use for a project involving the pepper.

“Luckily, we had the Chile Room. It was a total separate class and a total separate thing, and on our off time when we’re not working in that room we had a key and total 24/7 hour access, but this was the room to collaborate in. It was crucial to have that room so that we can post up inspiration and stuff we’ve seen,” explains Llacar.

Oh adds, “The only thing was that class was so cold and the air vents so strong, it was really the chilly room.”

Since the publication of the 826LA “best of” issue, 826LA has been able to use the magazine as a fundraising tool. For Yello, Friends! the project is a first of many.

The foursome have since banded together in a branding strategy that includes a Tumblr blog, video uploads and tweets. They even have cute merchandizing, from buttons to square-shaped business cards.

Their next project for the summer involves a large window display in Sherman Oaks, a project to turn empty windows into an art piece centered around the theme of mistakes; their most collaborative and intimate project to date.

“We came up with this idea of mistakes. We wanted to think about our mistakes, and how they’ve made us,” says Oh. “It’s a reinterpretation of our mistakes and other people’s mistakes.”

Chen adds, “We wanted to create this cathartic experience that started with us, and now we’re thinking about expanding it. Right now, we’re discussing ideas and how to get people out there to contribute.”

As graduates of 2009 and 2010, some of the group members spend their day jobs working for design studios as well as doing their own independent projects, but with Yello, Friends!, their reward is completely intrinsic, spending their own money on both the 826LA magazine and the upcoming window display.

“For now we just want to keep making stuff. Whatever it may be,” says Leung.

As their group motto sums it up: “Love your work like you love your friends.”