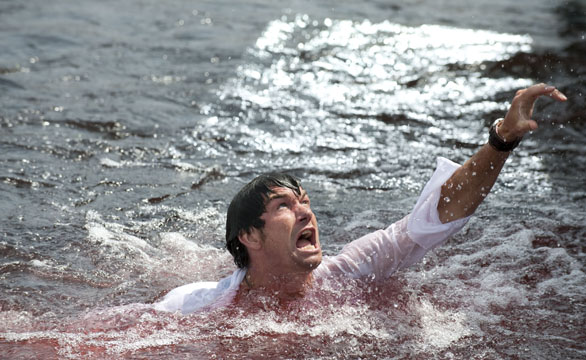 This year’s summer movie season has been a blast. However, noticeably absent has been a gratuitous display of blood, guts and breastuses. Why, just the other day I was saying that I wished there was a film that married my love of marine life with mass carnage and character archetypes from the comedy, Idiocracy. I asked for it, and by golly, I got it. Hallelujah!

Piranha 3D is the culmination of every good, bad and questionable B-movie cliché. It stars Elizabeth Shue (Hamlet 2) as Julie – a single mom and the town sheriff. It’s Spring Break, so the place is crawling with T&A. Julie’s son Jake is a teenager who’s been missing out on all the ribaldry in order to take care of this younger brother and sister. However, all that changes when Jake is hired by pervy porn producer Derrick (Jerry O’Connell) who bullies him into doing some production assistance. Jake winds up on the dude’s boat with a bevy of scantily clad supertramps alongside his good friend and crush Kelly (“Gossip Girl”’s Jessica Szohr). Their aquatic daycation starts out like a Girl after Girl after “Girl Gone Wild” video until all hell breaks loose. Seems some prehistoric fish have opened a can of whoopass on the local lake. Fortunately, there is a team of researchers on the scene to investigate the strange activity in the area.

That was the classy portion of the plot. But you don’t care about that. You care about the blood-fest, and boy does Piranha 3D deliver.

This movie is action-packed with copious amounts of humor, pop culture references, nifty celebrity cameos from several of the most notorious summer movie actors of the past 30 years and naked babes. Lots of naked babes. As a matter of fact, if you’ve ever contemplated a career in plastic surgery or gynecology, you’re all set. The violence is graphic, but cartoonish, so those leery about sitting through the kill-a-thon won’t have to suffer so much.

Overall, Piranha 3D is the perfect popcorn movie. It’s Jaws for a new generation of party-hungry, tech-savvy voyeurs and exhibitionists. What it lacks in style, it certainly makes up for in content and execution, particularly a scene involving O’Connell that is so gross, you’ll be laughing about it for weeks.