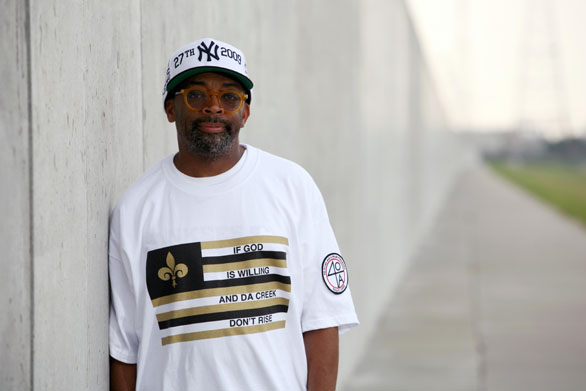 Academy Award nominated filmmaker Spike Lee has a few choice words for British Petroleum’s former CEO Tony Hayward about his handling of the Gulf Coast oil spill. In his documentary If God Is Willing and Da Creek Don’t Rise, the follow-up to When the Levees Broke: A Requiem in Four Acts, Lee blames BP for cutting corners and causing the biggest oil spill in history.

“There is no industry on this planet that makes more money than the oil and gas industry. It’s obvious they are very powerful. They can tell the United States government what to do and dictate to the coast guards what to do,” says Lee, who was initially just filming a follow-up piece to Hurricane Katrina when the oil disaster struck on April 20.

“This film is trying to tell what has happened in the last five years since Aug. 29, 2005, so therefore, we have to include the biggest oil disaster in the history of the world. We just went out and made more trips to New Orleans. It changed the structure,” he adds.

In the four-hour, two-part documentary, Lee is not only outraged about the oil giant’s drilling but also upset that President Barack Obama showed little emotion, calling the president’s actions “too laid-back.”

“The government response to the BP oil disaster was much better than the Bush response to Hurricane Katrina, but I think the people in Louisiana wished they would have seen a little more emotion from him because I know he cares, but his persona is too laid-back and cool, so he looked like he didn’t care. You have fisherman whose livelihood has been completely wiped out. BP is not God. Fuck BP. It was due to greed that the rig blew up, because they were glossing over safety procedures, and now 11 people are dead. Every time you cut corners, it’s going to come back and bite your ass!” slams the filmmaker.

Featuring personal stories from residents in Houston, where an estimated 150,000 New Orleans evacuees remain, the film also looks at other areas along the Gulf where rebuilding has progressed.

“Some parts of the city are rebuilt,” adds Lee, “but a lot of houses in those areas are in the same condition they were in five years ago.”

With more than 300 people, including former New Orleans Mayor Ray Nagin, weighing in on the aftermath of Katrina and the oil disaster, the documentary also focuses on the progress and failures in education, housing and population relocation since the hurricane.

“This thing is still playing out,” continues Lee. “We knew when we finished the first film that the story wasn’t over. It was clear it would take a long time for the city to get back on its feet, and I’m proud HBO has given me the opportunity to tell the stories of these great Americans. I still don’t believe the oil is all gone,” says Lee, who also briefly touches on the impact the oil industry has had all over the world, particularly in Nigeria, which is one of the world’s largest oil exporters.

“A lot of the gas and oil we use comes from this region,” Lee explains. “It affects us all, and films like this will make people connect the dots. This is all about big, big money. A bigger point, which comes up in the film, is that we have to get off our addiction to fossil fuel and start recycling. That’s one of the reasons why we gave Brad Pitt love in this film. He’s just a private citizen with a lot of money and connections, but he is building solar homes for people in New Orleans. The big question is, why can’t the United States government do that? Why is Brad Pitt doing it?”

As for Tony Hayward, who became a lightning rod for public outrage for saying he “wanted his life back” and going yachting while the colossal environmental disaster spiraled out of control, Lee has a question for him: “Did you get your life back?”