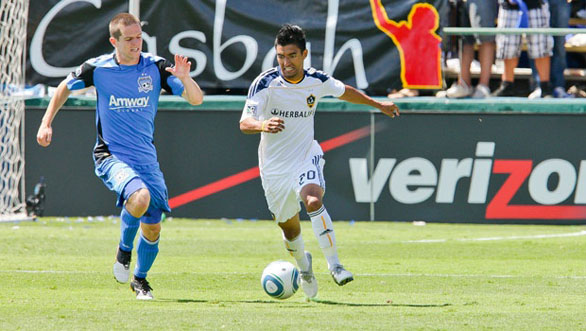 The Galaxy’s A.J. DeLaGarza attempts to keep the ball away from San Jose.
(Credit: Robert Mora/lagalaxy.com)

Another battle of the California MLS teams took place over the weekend, but the San Jose Earthquakes took control of this match en route to a 1-0 win at home over the visiting Los Angeles Galaxy at Buck Shaw Stadium in Santa Clara.

“That’s certainly a game that we gift-wrapped for them. No question about that. Our start of the game was poor, and it cost us in the end. That’s a game we really should have gotten three points out of,” Galaxy coach Bruce Arena says on lagalaxy.com. “But we didn’t, and there is nobody else to point the finger at but ourselves. We didn’t play well, and like I said, I feel that we gift-wrapped the three points for San Jose today.”

The stadium featured a record crowd of 10,799 in San Jose’s eighth win of the season. They are now 8-6-5 overall with 29 points and a fourth place spot in the Western Conference.

“I’m very happy. Obviously, L.A. had chances to score, and to get a clean sheet against a team like that shows the character in our dressing room right now. We’ve had two clean sheets in a row at home,” San Jose head coach Frank Yallop states on lagalaxy.com. “We got the one goal, probably could have had a couple more, but I’m very happy not only for our players but the fans that follow us and for the club. It’s a good position to be in, and it’s in our hands to see where we go from here.”

For the Galaxy, the loss marked their fourth of the 2010 campaign, but they still possess the best record (13-4-4) in MLS and a first place position in the conference.

Forward Chris Wondolowski netted the only score and game-winning goal in just the fourth minute of play. At times, surrendering early goals has been an Achilles’ heel for the Galaxy, who have the best defense in the league – allowing just 14 goals in 21 matches. “We just made one mistake,” Galaxy midfielder Landon Donovan points out on lagalaxy.com. “Give Wondolowski credit. He took advantage of it.”

Wondolowski penetrated the back of the net off a mental lapse play between Galaxy goalkeeper Donovan Ricketts and defender A.J. DeLaGarza. San Jose’s Bobby Convey sent a through ball into the box, but both Galaxy players neglected to clear the ball, which allowed Wondolowski to net his team-high eighth goal of the year.

“I try to pride myself on being opportunistic, try to make the best runs I can. Bobby Convey played a great ball in, Cornell [Glen] battled for it, and they had a little miscommunication in the back. I just continued my run and [was] able to pick up the pieces at the end of it,” Wondolowski says on lagalaxy.com.

And that was all the Earthquakes would need to secure the victory in the end, especially because goalkeeper Jon Busch earned a clean sheet after stopping seven shots that included dangerous firings from Donovan. Busch seemed to know and perfectly execute a save to every shot Donovan discharged. It just was not the Galaxy’s night, and he knows that.

“It’s hard to believe we didn’t score in that game,” Donovan tells lagalaxy.com. “Give them credit. They defended well. They played well. They got the goal they needed and were able to sit in and defend from there.”

Busch was critical to the match, and Arena acknowledges that.

“He made the save on Landon [Donovan] in the first half on the one-on-one and some of the other shots were right at him, but he held on,” Arenas says of Busch on lagalaxy.com. “He played very clean when dealing with some of our shots. Give him credit. He did a good job, and I might say he was the player of the match.”

The premature tally hurt the Galaxy in an enormous manner, as they now hold only a four-point edge over second-place Real Salt Lake.

The three points collected by San Jose represent solid play by the squad against the Galaxy. Back on July 22, the Earthquakes gathered a 2-2 draw in Los Angeles.