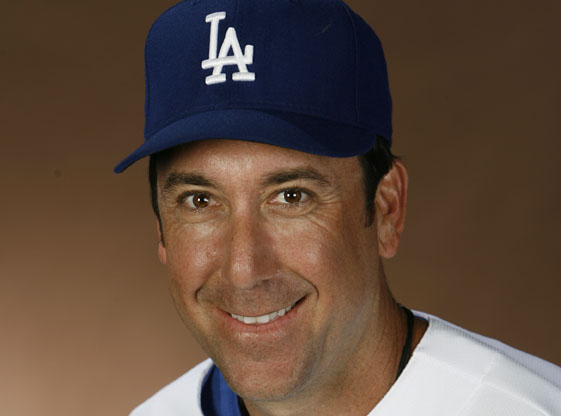 Mike Borzello has been with the Dodgers for three years since coming from the Yankee organization with manager Joe Torre. A native of the L.A. area, Borzello grew up watching the Dodgers and played professionally for five years at the minor league level. Borzello’s father is a childhood friend of Torre. Campus Circle caught up with Borzello after a particular gut-wrenching loss to the San Francisco Giants last month in a three-game series in which the Dodgers were swept. The series capped a losing stretch, which included 12 losses in 17 games since the All-Star break.

When did you first fall in love with baseball?

Mike Borzello: Probably when I was 7 or 8. I loved baseball because my dad loved baseball. When Joe would come into town I had the opportunity to go onto a major league field and watch batting practice. As a kid you’re making decisions you don’t even know you’re making. I would come down to Dodger Stadium with my dad all the time. We got to know a lot of people, the guards and stuff, so we had access to do whatever we wanted. Just being around it all the time, my dad’s passion, it was like osmosis. There was always a game on. He was always trying to teach me the game while we were sitting in the house, and it became all I wanted to do.

You were a Dodger fan?

Yeah, I was a Dodger fan. But with the opportunity to meet so many players over the years from visiting teams I started to have allegiance for players because I had the chance to meet them. But yeah, I was rooting for the Dodgers to win.

You played college ball and the minors…

I played in the minors for five years, and then I was done with that. And then Joe went to the Yankees. I was done playing, and I got a call from Bob Watson, who was the GM at the time, and I didn’t even know why he was calling. He said would you like to come down to spring training and see if we can put you in here, and I didn’t know what he was talking about. He said, “We want to know if you can throw BP and catch in the bullpen and that kind of stuff.” I really didn’t even know that was really a job at the time. So I said alright, I’ll come down. He told me to fly myself down. I didn’t even talk to Joe. Joe just threw my name to Bob Watson because they needed a guy to throw BP and catch in the bullpen. So he called me, and I wound up getting the job. And that was that.

Twelve years with the Yankee organization, four World Series championships and going to the playoffs every year – what was that like?

We won the World Series my first year. When I first got there the team, going into that year the team hadn’t won a championship in close to 20 years so the Yankees were not what everyone perceives the Yankees to be now. They built this empire, but it wasn’t like that then. There weren’t a lot of fans in the stands for the first couple of years. I think we drew like two million fans the first year. So, it was not the most glamorous place to be by any stretch. It was built into that, especially after the ’98 season it became more rock star-ish, more in vogue to be a Yankee fan than it was. When I got there they were talking about, nobody goes to the Bronx, nobody wants to go to Yankee Stadium, it’s too old. Everyone hated George Steinbrenner at the time. They grew to love him again, but there were not that many Yankee fans on the road. It’s just so different now than it was then. Everyone assumes it was always like this, but it really wasn’t. But they did have a passion to win. They were still figuring out a way to be a perennial contender.

Joe Torre has talked about the difficult pressure of working under George Steinbrenner. Did you experience that?

The pressure grew as the years went on. It became where winning a World Series was like, everyone thought it should happen every year. So when that happened nobody enjoyed the journey along the way because you’re waiting for the last out of the World Series to be the winner. You don’t really take in all the accomplishments along the way: winning the division, the first playoff series, the ALCS. That’s supposed to be a given. And it’s not that easy!

You are catching for pitchers moments before they go into big pressure situations. Is there anything you do to help the pitchers stay focused and not let their nervous energy sabotage them?

At this level, they’re pretty much on their own. We just hope that they are prepared and try to keep them focused on the task at hand, as opposed to thinking about how big the moment is. It’s hard to diminish how big the moment is at times, but you still have a job to do and if you think about that job, what pitches I have to make and not think about too much else, then you can focus easier on getting your man out.

I saw you after the game last night, asked how you were doing, and you said, “Not very well.” Is there bleed in from the emotions of the daily game and your life outside the game?

You try to separate the two, but we’ve had a tough stretch. It’s not just yesterday. Usually you can let one go, but we’ve had a couple of tough games in the last 10 days. It starts to pile up on you, and your mood is not quite where you want it to be. You just want the tide to turn.

After being with the Yankees for 12 years, was it hard to switch allegiances when you came to the Dodgers?

Yeah, it’s tough, being a Yankee for a dozen years and then coming here it was different, but it was my hometown team growing up so it was kind of exciting. But yeah, it was difficult to now not be rooting for the Yankees after rooting for them for so long, but I still have a lot of friends over there and coming here, you just start over, start pulling for the team that you wear the uniform of. Once you get through spring training it’s business as usual.

What did you most enjoy about joining the Dodgers?

Just being in L.A. For me personally, my daughter lives in L.A., so that was the biggest thing. I get to see her all the time. I grew up in L.A. I know the city. It wasn’t anything new, but leaving New York was tough because it’s such a fun city and the Yankees are the biggest thing.

It must have been a blast to be in your late-20s and wear the Yankee uniform.

Oh, it’s the greatest thing ever. You’re like rock stars, especially when you’re running around with Derek Jeter and guys like that. It’s unbelievable, you know. L.A. is about the movie stars but New York is about the Yankees … They’re like Gods out there. People go crazy.

How do you think the McCourt divorce has affected the team?

Where I’m at, it doesn’t affect the team. We’re not involved with that kind of stuff at all. We’re just focused on the task at hand, baseball. We’re not talking about relationships, the owner or what’s going on with this person or that person. There are too many other things in baseball you have to do. You’re thinking about today’s game. How are we gonna win today. Who’s in the lineup, who are we facing, all the reports, all the preparation. Everyday there’s a lot to be done. Fans don’t realize it. They show up at 7 o’clock. We’re here at one. This is everyday, all day. All the stuff that is around it, we don’t have time for. It’s like someone gets hurt and goes on the DL, well, he’s gone, so we have to win with who we got now. You just have to keep moving forward.