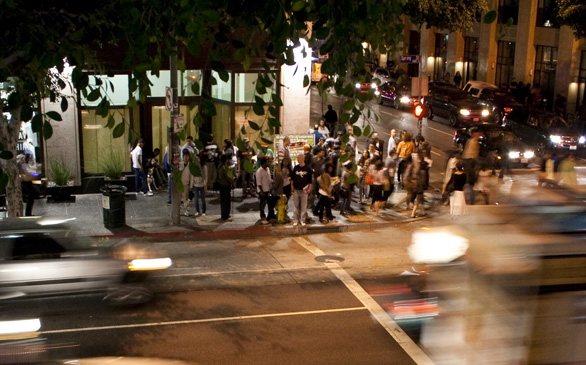 There was a running joke we had while walking down the street at the Downtown LA Art Walk this past Aug. 12: L.A. locals drive so much, they can’t even learn to walk. Which is true because we’re used to congestion on the freeways, but on sidewalks?

The Downtown LA Art Walk happens every second Thursday of the month starting from mid-afternoon to about 10 p.m. During this time, sidewalks are packed and fully integrated with tourists, businessmen, hipsters and clubgoers, teenagers, dancers, rock stars, etc., all converging in the heart of downtown between Spring Street and Main Street and from 2nd Street to 8th Street.

Now that I have transitioned to an official L.A. locale, Downtown L.A. is usually dead at night, and also pretty scary. For my first time at an event that has been around since 2004, the art walk completely transforms Downtown L.A. to the streets of New York. Yes, I said it! Pedestrians spill from the sidewalk onto the streets and intersections are cornered by gigantic crowds of roaming tourists.

Our first stop, where Broadway and Gallery Row cross, was kind of rough because the venue felt hot and musty from all the people, plus hearing one person look at something and say out loud, “Really, this is art?” while the artist stands right next to their work was pretty harsh. The galleries I preferred were the smaller venues that were usually hidden toward the end of Spring Street.

The artistry of the Hive (729 S. Sprint St.) hosted a slew of exhibits that utilized different mediums, including paintings on mirrors and aluminum canvases. One venue was a huge dancehall surrounded by artists and vendors, but in the middle were a row of chairs with pieces of art “sitting” facing you. Like the running favorite of artists throughout the night, it involved the lovely, fully naked, big-breasted female form. In this version, they were fully silhouetted, suggestively posed, but not just because. In some versions the female form was tiny with large, looming silhouettes of businessmen hovering over her. Definitely a message there! Art that makes you think is worth my time, while others like a Polaroid of ice cream is pretty, but really just kept my brain wastefully empty.

Walking the streets of Downtown L.A. is the ultimate gallery experience. We passed by a punk rock band with their own shimmying female dancer keeping the crowd happy, and on the other side was a DJ playing a Jamaican trance beat. On another corner was an actual Jamaican band. There were fire breathers, hip-hop dancers and performance artists wearing bunny outfits confusing everybody and stop … there goes a huge cockroach. We watched it crawl along the sidewalk, scurry onto the street and fall into a manhole.

There was a range of interesting characters, too. Walking into Temple of Visions (719 S. Spring St.), there was a bizarre mix of men wearing feathers on their head, tarot cards and women dressed in something out of a space odyssey meets a Renaissance faire.

Vendors showcased clothing, jewelry and especially art. That’s the one thing a lot of people miss. The art walk is a way to support artists; almost everything on display has a price tag next to it. Prints run between $10-$100 while the cheapest painting I found ran for about $200.

It may seem ridiculous at first when I looked at “Sexy Eggplant” at a sexy price of $300, but as I spoke to one artist (the one with the aluminum canvases), it took him two weeks to create a piece the size of an 8x11 piece of paper. It involved motion photography, scratching the aluminum, painting, drying and coating: an impressive feat and a marvelous product. You can consider the whole art walk event a giant bazaar. Next time I know to bring cash.

Another reason to bring cash: food trucks. Two parking lots full of them. If you’ve never tried food truck food, then you’re missing out, my friend. Missing. Out.

As the event started to wind down between 10 p.m. and 11 p.m., the streets were once again returning to their old frightening stupor. Gallery doors shut down and the artist exhibits slowly disappeared. Now that the foot traffic is nonexistent, our lovely roach can roam the streets freely once again.