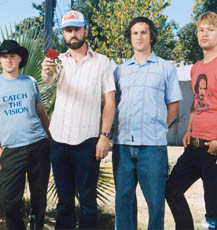 "My smooth contemplations will always be broken, my deepest concerns will stay buried and unspoken. No, I don’t have any change, but here’s a few subway tokens," sings Cake vocalist John McCrea over an entrancing groove on the band’s magnetic new single, "No Phone," proving, once again, that Cake is here to stay.

As with past albums, the lead single is a nutshell version of the entire record – sardonic, captivating and clever.

"While we’re recording, one of [the songs] seems to stick out and we think, ‘Yeah, this would sound good on the radio,’" says trumpeter Vince DiFiore. "Maybe because it has a really solid guitar riff [or] something chunky that people’s ears can grab onto. Something that’s going to cut through and make people notice it. As we were finishing recording, ‘No Phone’ was emerging as the obvious single. It had a very urgent feel to it."

The much-anticipated fifth album from Cake entitled Pressure Chief (Columbia) is the Northern California foursome’s first release since 2001’s Comfort Eagle, which exercises the same deadpan-but-heartfelt approach as its predecessors.

"[Pressure Chief] sounds phonetically interesting. It describes the milieu that we’re all living in," says DiFiore of the new album’s title. "Everybody seems to be obsessed with leaders and how leaders are going to get us out of situations. We chose it to find some sort of descriptive phrase of the times that we were living in as we made the album."

Despite similarities with past recordings, this album is a significant leap for the band.

"We recorded this record ourselves," says DiFiore, whose poignant and urgent horn lines, along with McCrea’s wry lyrical wit, create Cake’s unmistakable sound.

"We made our own studio, we set up our own gear, and did it all on our own," he continues. "It was great; it was a really good learning experience. Everybody felt a little bit more intelligent because we were the ones turning the knobs and pushing the buttons. It felt like we had a lot of control over what we were doing."

"And we finally got the whole band to sing!" DiFiore adds. "Everybody got a microphone."

On the heels of Pressure Chief, Cake took off on their first headlining U.S. tour since 2001.

"We get to see a little bit of a slice of American life. We’re all interested in politics and sociology, so it’s good to get a random sample of what’s going on all over the country," DiFiore says. "You see a lot of people who are living decent lives, who are somewhat unaffected by any kind of supposed impending tragedy that may befall us. Basically, people just getting on with their lives.

"I see there’s still a certain amount of fundamentalism," he laughs. "There are still a lot of fundamental Republicans out there. Everyone is interested in the election – that’s the focus."

Though politics have never been at the forefront of Cake’s music, it has often been influenced by it.

"It seems like political messages are more direct in the form of an essay in a magazine or a political pundit on television," notes DiFiore. "But there is something about the personal [message becoming] political. There are personal expressions that come out in our music that could be extrapolated to the political realm.

"We’re political people, but we realize that we’re entertainers. That’s our form of concern and our obligation – to entertain people. We have our own political opinions, but we respect everybody else’s too."

After 12 years and five albums, Cake still has a lot of music waiting to get out. When asked about the future of Cake, DiFiore responds with simply, "The present is pretty good. If we can make another record, then we’ll be happy.

"We enjoy doing this and feel like we still have something to offer," says an enthusiastic DiFiore. "We really feel like there’s something worthwhile about our music."