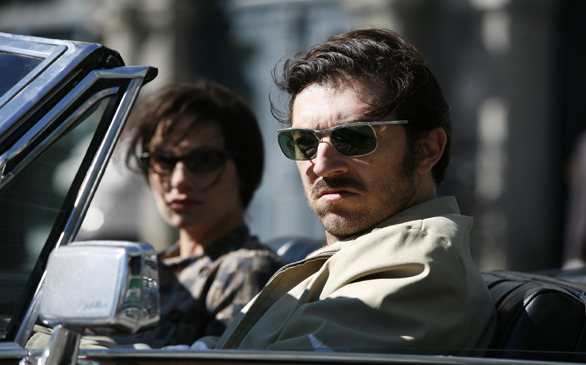 Vincent Cassel is known for the intensity that he brings to his work. For the role of Jacques Mesrine in the new, two-part gangster biopic (Mesrine: Killer Instinct and Mesrine: Public Enemy No. 1), he brought something besides intensity: 40-plus pounds of extra weight.

“I’ve started to know how I work, and I know that on a set I tend to lose weight, because of the stress, because you don’t have any sleep, because you don’t eat properly. The problem is that, maybe here you don’t know because the character is not known in the U.S., but in France people know the guy from the pictures he made by the end of his life. And he was fat – I mean, he wasn’t fat, but he was much bigger than me. So, I had to get there at some point, otherwise the audience would be a little disappointed, you know? I went to see the director and the producers, and I said, ‘You know, if you want me to do it for real, we have to start like that and go reverse.’ And that’s what we did.”

So, the normally svelte Frenchman began the laborious process of gaining lots of weight, really quickly. Just what does one eat when hoping to gain almost 50 pounds in a matter of weeks?

“Everything you shouldn’t,” Cassel laughs and adds, “drinking beers with syrup in it and, actually, it was really complicated because I tried to do it only through food and I realized I couldn’t. Over 80 kilos, 81, I couldn’t go further and I was already throwing up in the morning, so I went to see a doctor and he gave me something to help me, something that works on your insulin, so you stock the sugar and the fat. It’s not something that you want to do, honestly. I did it because I’m an actor and we do things like that, but I won’t do it again.”

Gaining the weight may have been the physical challenge for Cassel, but the real effort was in coming to terms with the notorious character he was about to embody, and to try and understand why Jacques Mesrine still fascinates to this day.

“Why do people like him? It’s really amazing, you know. I really put in a lot of effort not to glorify him. At a certain point, we had a draft where he wasn’t a racist anymore. He wasn’t so violent with women. He was cool. He was just like Robin Hood. And I was against that because I thought the point of the movie – you know, what happened in his real lifetime, the magic that happens – that even though he did everything he did, people still liked him. And that was the challenge, to recreate that on screen. So, we didn’t do anything to save himm and at the end of the day, people don’t hate him. But he’s not a likeable person, really. I don’t think so. I mean, he solved his problems in a very violent way, every time he has one. So, I guess maybe it is his sense of honor? Maybe it’s the fact that he’s ready to pay the price for what he is.”

Going against the grain can certainly win people’s sympathy, but empathizing with such a brutal man is far more difficult for the humane actor.

“Honestly, some scenes, we were shooting them and I was turning to the director and I was telling him that, first of all, I don’t agree with what he is doing right now, and I think we will lose the audience. He said, ‘No, no, no. We won’t.’ And he was right, in a way. I need to understand why he’s doing things, but I don’t need to agree with him to play him. He’s not a comfortable character to play. He’s always nervous. He’s always violent. It is very tiring to play this guy on a nine-month shoot.”

Cassel believes, despite Mesrine’s reputedly violent nature, that it was his fame that became his undoing.

“He started to use the media, and my take on that is that, finally, he died because of that. And not because of what he did, because until today not one of the murders he’s been accused of has been proven. We don’t even truly know that he killed anybody. But still, he’s been shot 17 times in the middle of the street, his body exposed on TV at eight o’clock prime time. So, it was a statement from the government that … you can’t fuck around.”

In the end, Cassel hoped to use a different kind of media to expose the ugly truths of the criminal folk hero.

“You see, I started in this industry with a movie called La Haine (Hate), and it was about the suburbs, police brutality and all these things. Most of my friends came from the suburbs and my fan base is the suburbs. Blacks, Arabs, immigration, really, and I was really amazed because a lot of my friends were totally fans of Mesrine. And then when I started to study his life, I realized that the first guy he killed was an Arab, and the second one, too. I thought it was really interesting to confront the audience with that aspect of their hero. I wasn’t a fan of Mesrine. I didn’t really care. I never walked around with a T-shirt with his face on it or anything like that, and a lot of my friends did. My personal attraction to the thing, to the whole project, was to confront those guys – my friends, actually – to this. I thought people would hate him afterwards. And they don’t. They don’t care.”

Truth is, as always, stranger than fiction. And it makes for a hell of an entertaining movie.