The People I’ve Slept With 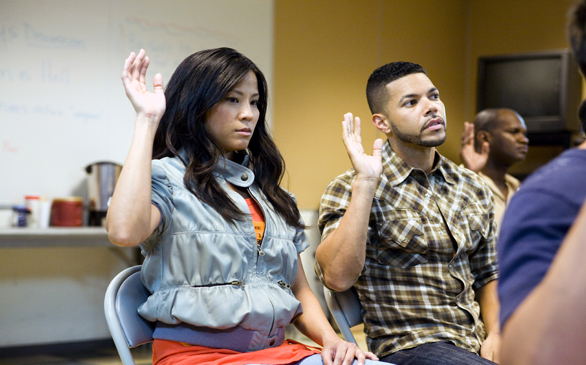 A self-professed “slut” from Los Angeles finds herself in the annoying predicament of having to seek out her baby daddy in The People I’ve Slept With. Angela (Karin Anna Cheung) loves to get her freak on – and with as many guys as possible, but she never imagined that she’d wind up pregnant, or that her friends and family would have such strong feelings about her next steps. Angela’s conservative sister, Juliet (played by Lynn Chen), wants her to keep it, settle down and be a respectable Asian mommy. Meanwhile, Angela’s gay bestie, Gabriel (Wilson Cruz) wants her to take care of her little problem before it wreaks havoc on their social life.

Angela opts for motherhood, which sends her on a hilarious, somewhat Dickensian romp through the ghosts of penis past. Is the daddy the cute, blonde 20-something hipster? The prim and proper Korean guy? The sexy but mysterious Chinese politician? The speedy Latino? She’s not sure but is determined to find out by any means necessary. However, as months go by, Angela not only learns more about the potential fathers, but she picks up some valuable life lessons about herself as well. In the end, the father is exactly whom she thought he was, leaving the audience with a bit of a twist along the way.

As a reviewer, I’m usually pretty good about playing it cool during film critiques. But let me just say that I LOVE THIS MOVIE. Watching The People I’ve Slept With gave me the same warm fuzzies I got from seeing But I’m a Cheerleader for the very first time. It’s charming, sexy, shot well, acted well and even better – written well. The dialogue is witty and flowed easily from each character’s mouth. The direction is also clean and stylish enough to play in theaters, but intimate enough to translate onto a television set or computer screen.

Cheung is a fantastic female lead and quite engaging as the promiscuous girl with good intentions. Not once does she overdo her character’s sexuality. Cruz is also great in his role, mixing humor and believability with near-perfect pitch. Sure, there were one or two moments (such as the wedding scene) that felt a bit like daytime TV but not enough to do the film any real harm. Director Quentin Lee even throws in a cheeky and fun incentive to keep audiences in their seats through the end credits.

The People I’ve Slept With releases in select theaters Aug. 27.