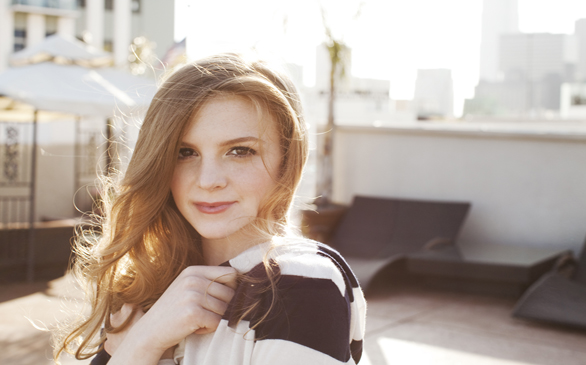 Ashley Bell, the star of The Last Exorcism, isn’t encountering any curses, only luck. With a growing resume, Bell is looking forward to the approaching release of her first starring role in a film.

Bell stars as 15-year-old Nell Sweetzer from the backwoods of Louisiana who begins committing detestable acts in The Last Exorcism. Reverend Cotton Marcus (Patrick Fabian) is sent to determine whether she is insane or possessed by the Devil.

As filming commenced, Bell was unsure whether or not the content of the film was realistic.

“It’s odd. I started out doubting it. The more I researched and the more I read, the more I would doubt and wonder,” reveals Bell.

After listening to a swarm of tapes of actual exorcisms, her mind began to open up to the idea. Throughout her research of the tapes, Bell claims to have heard voices that were “not masculine, nor feminine, nor human.”

Becoming the character of Nell on set day in and day out might have been creepy, but Bell only holds onto the amazing memories.

“I loved being on set every single day,” tells Bell. “There was always a new challenge, and there were always new turns to take. I think the worst day was when it ended.”

Bell had only compliments to hand co-star Fabian.

“He was so generous and an intent listener. I really lucked out. To have someone with that caliber of acting to play against was really great,” boasts Bell.

“The opportunities that this film has opened up have been huge! Only good things have carried over. Did I luck out that I’m not possessed?” jokes Bell.

Although she may have walked away from the film unharmed, Bell didn’t escape the fear completely. After screening the film completely for the first time at the Los Angeles Film Festival, she admits, “I slept with the lights on that night. I scared myself.”

While the horror genre is new to Bell, she found it exciting nonetheless.

“Not only is it a horror film, it’s also along the lines of a psychological thriller,” explains Bell.

“It’s a good date flick,” Bell continues. “The guys will go and like it, and the girls will have an excuse to jump into their arms.”

The Last Exorcism is Bell’s biggest film role to date.

Bell has also been spending her time studying with the Groundlings, the L.A.-based sketch comedy group. The Groundlings host a school for both professional and beginning actors to learn the art of improv. Bell has been working in the writing lab program, and finds it interesting to learn about that aspect and to see what works for a scene and what doesn’t.

The classes are beneficial not only for her writing, but also her acting. Through the process, she has discovered more about how characters develop by educating herself on writing.

Her mother serves as one of the founding members of the Groundlings, so Bell grew up watching and admiring the performers there. She likes seeing the way they worked with no inhibitions.

“They make fun of themselves and let it all hang out. I thought that seems like so much fun. I want to do that. I want to make fun of myself,” says Bell.

With her breakout role in The Last Exorcism, Bell’s projects are quickly stacking up. She has a couple of upcoming projects that she cannot yet disclose information on, and she is also set to appear in Stay Cool starring Winona Ryder.

As far as future goals, “I would love to do a comedy,” says Bell.

Upon graduating a year early from NYU’s Tisch School of the Arts, Bell says, “I knew immediately I wanted to come back to L.A. to pursue film and TV.”

“This character [Nell] was really great,” says Bell. “I just hope I have a career full of playing those characters.”