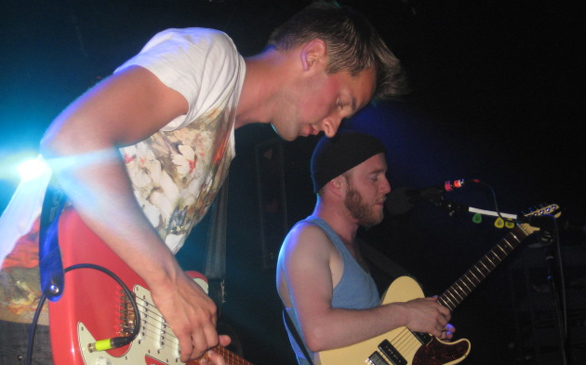 There’s something about watching a band blow up and finally acquire the fan base that it deserves. It seems that at last America (or at least Los Angeles) is catching on to the phenomenon that is Wild Beasts. A particularly appreciative and adoring crowd welcomed back the Leeds, England, art rockers.

Wild Beasts are quite the spectacle, not only for their unmistakable sound and remarkable delivery, but also for dueling vocalists and multi-instrumentalists Hayden Thorpe and Tom Flemming’s onstage presence. The two unassuming gentlemen wield a tremendous amount of charisma as they perform their delicate dance of instrument and position swapping throughout the show without missing a beat or even grazing toes. The audience eats it up.

The band opens with the atmospheric “Fun Powder Plot,” which has evolved on the road into a lumbering menace, delicate on the surface with a foreboding aura hovering over the entire piece. “This is Our Lot” follows, also having evolved into a looser, freer composition that now soars.

The band’s more recent single, “All The King’s Men,” is warmly received while the band’s first single “Brave Bulging Buoyant Clairvoyants” sends the audience into an utter frenzy, despite a slightly less energetic than usual delivery. “Please Sir” is stunning with Thorpe’s voice alternately rising to a crescendo on the mighty refrain. The entire theater seems to hold their breath in anticipation.

The somber “Two Dancers I” follows and Flemming shines here, overcome with the energy of a man possessed, stumbling about the stage between vocal lines as he pummels his guitar strings with drum sticks. Then, if we weren’t impressed enough, on “Two Dancers II,” he takes over both keyboard and bass duties, while maintaining a flawless vocal performance.

The mood is lifted with “We’ve Still Got the Taste Dancing on Our Tongues,” delivered playfully as the exuberant crowd sings along. Early single “The Devil’s Crayon” is met with equal enthusiasm, closing out the set.

The band is dragged back out to perform clear favorite “Hooting and Howling,” which receives the warmest reception of the evening: The crowd sings along passionately through the entire second half of the song, which collapses into an atmospheric dub wash. The final number, “Empty Nest,” is again energy heavy, and the band throws themselves into every colossal moment. A truly breathtaking performance.