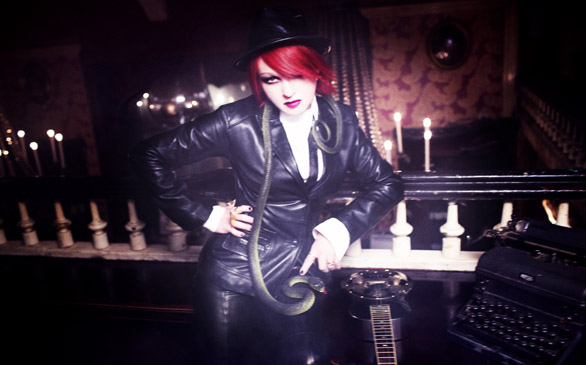 It’s been 27 years since a high school dropout from Queens would become famous for being so unusual. With her Rainbow Brite hair, thrift store couture and Betty Boop voice, Cyndi Lauper found fame in the ’80s when MTV was more music than reality television. Like Madonna, she sang about losing her innocence in “She Bop,” all while declaring her independence minus a cone bra with “Girls Just Wanna Have Fun.” Time after time, she transformed from post-punk princess to crooning chanteuse, releasing 10 albums ranging from infectious club anthems to stripped-down acoustics. Now, the 57-year-old, who holds the crown for being the first female to have five Top 10 singles from her debut album alone, is returning to her roots.

“I honestly think it’s one of the best performances of my career,” boasts Lauper while on tour to promote her latest release, Memphis Blues. “I wanted to do this CD for eight years now. I have been listening to the blues since I was a kid. Later on I fell in love with Janis Joplin, so I always had this project in the back of my mind.”

For her musical journey, the native New Yorker traveled down south to Electraphonic Studios in Memphis, the city where the genre was born. Jonny Lang, Allen Toussaint, Ann Peebles and Charlie Musselwhite became the legendary lineup she selected to tackle a sound that doesn’t have the same commercial sheen as her feel-good pop.

The same woman who has battled wrestlers strikes back in Memphis Blues, resembling a long-lost record discovered in a dusty attic. The album opens with “Just Your Fool,” where Lauper wildly hoots and hollers, warning her wandering lover that she’s ready to buy a shotgun if he dare looks the other way. “Early in the Mornin’” has Lauper roaring at 84-year-old B.B. King with such gusto you would think she’s been jamming with the guitarist all her life. Then there’s “Crossroads,” where she and Lang work up a frenzy like two lovers competing in the bedroom. According to Lauper, it was “making music the old-fashioned way, live warts and all,” a challenge she happily accepted.

“From the moment Allen [Toussaint] hit the keys in ‘Shattered Dreams,’ I knew right away we were creating something special,” says Lauper. “For me the best part of the blues is telling stories that are uplifting and about perseverance. I was looking for that when I was choosing songs. I also looked for tracks like ‘I’m Just Your Fool’ that are just fun and great pieces of music. It was a dream record for me to record.”

After selling over 30 million albums and earning 13 Grammy nominations, Lauper proves yet again that she’s still got it. Since releasing Memphis Blues in June, she’s performed sold-out concerts throughout the United States. Refusing to settle down, she’s also competed in Donald’s Trump’s “The Celebrity Apprentice” on NBC. The show’s popularity inspired Lauper to start a new project: a reality television series of her own.

“I inked a deal with Mark Burnett Productions before I signed on to do ‘Celebrity Apprentice,’” she reveals. “Burnett and his crew are probably the most successful producers of reality TV, so I’m really happy to be in partnership with them. We start filming in January. It’s going to be mostly about me and my career. I am super excited to start!”

Lauper is always reinventing herself, but her determination to raise human rights awareness has always remained. From the oil disaster to the ongoing war, she points out that the never-ending list of problems is causing everyone in the country to sing the blues. After a federal judge recently overturned California’s same-sex marriage ban, the iconic performer hopes that this can lift some of the nation’s ongoing depression.

“There is so much that needs to happen, it is hard to single out just one or two things,” says Lauper. “I’d definitely like to see ‘Don’t Ask, Don’t Tell’ finally repealed and the Employment Non-Discrimination Act passed. The biggest thing I would like to see more of is straight people standing up for the LGBT community and just as important, LGBT reaching out to the straight people in their lives to show support.”

From Technicolor pop star to tireless activist, Lauper has seemingly done it all. Since collaborating with Lady Gaga for MAC’s Viva Glam campaign, many have wondered whether the two famous blondes would work together again in the studio. Although she admits that the duo haven’t been together long enough to even contemplate a duet, anything is possible. For now, she’s content with being a lady singing the blues.

“I have no regrets,” says Lauper. “Never. It’s about the journey.”