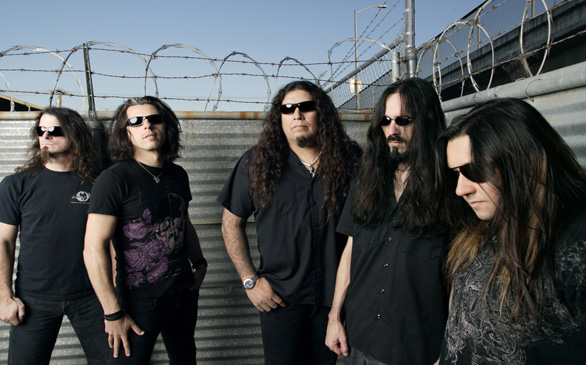 Twenty-five years ago there was a shift in music. A music label named Megaforce was breeding a new style; it was heavy, passionate and fast as hell. Thrash music was born in the early ’80s with bands like Megadeth, Anthrax, Slayer and Testament.

As time went on, the above-mentioned acts took hold of the music scene and helped develop what we now know as heavy metal. Each had its own style and built a subculture of bands that followed in their footsteps: Megadeth took the epic, melodic approach, Anthrax built the fast as hell NYC sound while Slayer took their punk-based metal sound to a much darker place than most had ever gone.

With this evolution in music, Testament found their punk influences being shaped into a heavier entity that not only pushed the boundaries of music but lyrics as well. Always talking about war and life, the band also integrated topics about taking care of the earth and issues that face us on a daily basis.

Frontman Chuck Billy’s voice has gone from a high yell to a deep growl that fits nicely with the band’s heavy sound that has been whipping sold-out crowds across the world into chaotic messes this past year. And now, Testament joins with the bands they toured the Earth with back in the day – Megadeth and Slayer – for the American Carnage Tour.

Billy comments, “It’s like a 20-year reunion being with these bands … Seeing everything from the kids at the front and the old guys in the stands. It’s great for us to play on this bill to expose our younger fans to our older stuff. It’s the full history of Testament.”

The last time these bands hit the road together they left a wake of destruction in their path.

“Everybody was drinkin’ and fucked up before the show,” adds Billy, “but now everyone is concerned about giving a good show. We all approach the shows the same.”

So what can you expect when Testament and the others come to town?

“We are playing more stuff off The Gathering and Trial by Fire. We only have eight songs to pull from a list of over a hundred. We try to give the fans a little bit of everything,” says Billy.

The bottom line with the American Carnage Tour is that you aren’t just getting the best metal on the planet; you’re being exposed to bands that have changed the face of music. They just might change the way you look at metal forever.