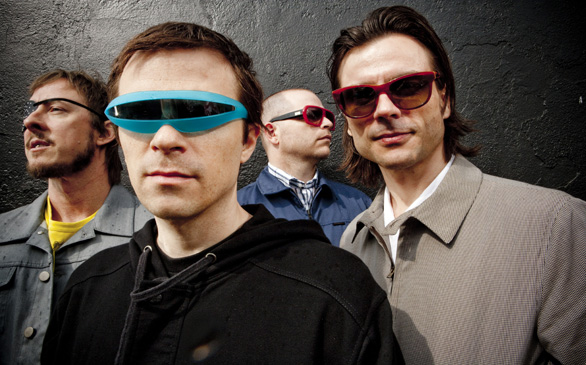 Alt-rock heroes Weezer have signed with Epitaph Records and have a new studio album entitled Hurley set to drop Sept. 14. The title is a reference to the character that actor Jorge Garcia played on the recently departed television program “Lost” and the album’s cover graphic features a close-up head shot of the chubby-faced star.

Weezer frontman Rivers Cuomo, speaking to Spinner.com, explains his reasoning for calling the album Hurley. “I was coming up with all kinds of stuff but ultimately we just went with some random word that doesn’t really have anything to do with anything,” says Cuomo. “I just loved this photo of Jorge Garcia; it just had this amazing vibe. We didn’t want to do a fourth self-titled record, and we knew people would refer to it as ‘the Hurley record’ even if we left it without that title. So we just called it Hurley. No words are on the cover because all we wanted was his amazing face.”

If you’d like some amazing new Weezer music while you’re waiting for Hurley to drop, you can purchase the first single “Memories” now at iTunes or stream it at the band’s MySpace page.

This is the era of the band that Banali is chronicling, with the classic lineup featuring himself, Rudy Sarzo on bass, Carlos Cavazo on guitar and the late Kevin DuBrow on vocals. Surprisingly, there is very little Quiet Riot footage from this era, and most of what Banali is working with is from his personal archive.

Fans that participate in the Quiet Riot documentary online fundraiser have a chance to earn various rewards, such as an autographed photo, a drum lesson or dinner with Banali and a personalized Metal Health platinum CD award. If you’d like to help out, do so by Sept. 3 at kickstarter.com.

New Earth Records is set to release an album of Buddhist and Christian prayers that features musical icon and longtime practicing Buddhist Tina Turner. The purpose of Beyond is to give listeners a chance to experience the oneness of religions through music and also features compositions from Tibetan Buddhist Dechen Shak-Dagsay and Regula Curti, a Christian. Turner chants the Lotus Sutra “nam myoho renge kyo” on the recording, a mantra that was also featured in the closing scene of her feature film What’s Love Got to Do with It.

The meaning of the ancient Lotus Sutra is “I devote my life to the mystic law of the Lotus Sutra,” and Turner says, “The more you repeat the words the more you make your life cleaner. The more you chant it, the closer you get to your true nature. It is indeed mystical and my life has proven this.”

Beyond has the blessing of the Dalai Lama and drops Sept. 14.

Pelican in a Box

Chicago-based heavy instrumental rockers Pelican have a new box set out that encompasses material from their four full-length releases as well as their EP archive. Produced by Viva Hate Records of Berlin, the Pelican pack comes in an elegantly appointed wooden box.

The band is equally excited about another honor coming their way; the Three Floyds Brewery has announced they’ll soon be releasing a Doppelbock ale named after the band. Alas, the microbrew will only be available in the Midwest; don’t expect to quaff any at the Troubadour when Pelican lands there Oct. 30.

Mason Jennings has released his first live album this week; Live at First Avenue will have to tide you over a whole month until his new studio album The Flood drops in September. Jennings plays two shows at Largo at the Coronet Sept. 14 and 15.