An Inside Look: At NCAA Football’s Top 25 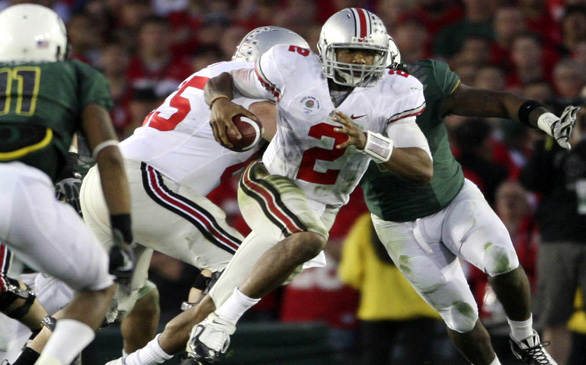 Yes, folks. College football is just around the corner, and the first preseason rankings are available via the coaches’ poll. Alabama is the commanding top-ranked program in the nation for the second consecutive year.

The Crimson Tide still have a lot to prove, but mostly in showing that they are consistent. This depends on head coach Nick Saban, the mastermind behind the entire progress and development of Alabama since arriving in Tuscaloosa three years ago.

“These players have grown up in the system,” Saban tells YahooSports. “They just don’t have the knowledge and experience, the game-time experience we’d like for them to have, which helps them to develop confidence and consistency in their performance.”

Alabama has an experienced and talented offense returning, arguably the best coaching staff in NCAA football, but they have worries at the defensive side of the ball since loosing nine full-time starters. Defensively, the Tide are rebuilding what guided them to an undefeated 14-0 season in 2009 en route to their National Championship Bowl Game victory over Texas.

“We don’t have a lot of depth. We haven’t defined all the roles, especially in the secondary, that some of these guys can do, because we don’t have a lot of experience there,” Saban adds. “I do like the talent level we have. I do like the attitude that the players have worked with. I think this is going to be a defensive team that improves throughout the course of the season.”

Florida, Texas, Oklahoma and Miami provide the biggest competition for Alabama in defending their national title, but that does not mean that other squads cannot spark their seasons. For example, Alabama travels to Arkansas, South Carolina, Tennessee, and LSU; they are potential losses because of the environment the Tide will experience.

The OSU Buckeyes have a tough schedule as well, and it is highlighted by their second affair of the season in entertaining the No. 13-ranked Miami Hurricanes on Sept. 11. Other key matchups include the Oct. 16 showdown in Wisconsin against the No. 12-ranked Badgers, the Nov. 13 thriller versus No. 14-ranked Penn State and the battle at No. 10-ranked Iowa. Junior quarterback Terrelle Pryor leads the charge offensively, as head coach Jim Tressel looks to continue his success after an 11-2 mark last season that included a 7-1 record in conference action.

Pryor’s teammates want him to step up this year.

“I’m expecting great things from Terrelle,” offensive lineman Justin Boren tells the Canton Repository. “He is the most capable athlete on this team … Terrelle is an insane athlete.”

Urban Meyer is directing the Florida Gators yet again, and they look to be consistent after suffering a defeat in the SEC Championship game to Alabama that eliminated them from contention for the National Title. The Gators recorded a 13-1 overall mark, while going 8-0 in SEC East play. The 2010 schedule is in their favor, but their toughest affair is on the road at Alabama, which is no doubt the game of the year to watch. Inspirational leader and starting quarterback Tim Tebow has left and is now with the Denver Broncos. Who will step into his role? That remains to be seen.

“It’s definitely different than last year, when we were the top-rated team, but this is a new team and a new year,” senior defensive end Justin Trattou tells YahooSports. “The expectations around us might be different, but our expectations are the same, and you could see that by how hard we’ve worked this summer.”

Texas is looking to return to the BCS title game after having lost it earlier this year. Coach Mack Brown is potentially the most motivated to succeed and overcome his critics. Quarterback Colt McCoy has left due to the NFL Draft, and that void is filled by Garrett Gilbert.

The running game is what Brown wants to excel in.

“Last year, I didn’t think we ran the ball well at all, and I thought we got worse as the year went on instead of better. I like the progress we’ve made, but we’re still not there,” he tells reporters during Big 12 media day.

Rounding up the Top 5 is Boise State, a team that has achieved a lot through the last few years in spite of its conference’s lack of recognition. They are perhaps the most compelling story of this season since they have been victorious in 26 of their last 27 games. Quarterback Kellen Moore leads the team, and he will look to continue their success. Boise State opens 2010 with a visit to No. 6-ranked Virginia Tech on Monday, Sept. 6.

“We need to be preparing as if our life is on the line,” Boise State coach Chris Petersen tells YahooSports. “Before we know it we’re going to be headed back to Landover to play Virginia Tech and I think our guys realize that as well.”

Alabama is the evident favorite for the title, but other teams like Florida, Texas and Ohio State might have something to say about that. We cannot leave teams like Oregon, Oklahoma, Penn State, LSU, Georgia and Utah out of the discussion either.

After all, this is college football, where athletes are still developing and learning. This is where several vicissitudes may happen. Upsets can occur. Alabama could win, but others will continue to battle until achieving glory of their own.