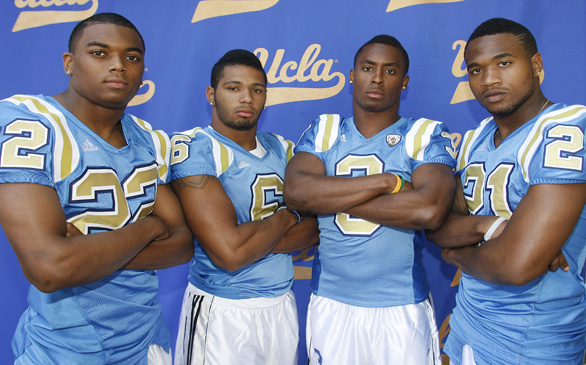 The UCLA Bruins football program has not had a commendable winning season since 2005, when they went 10-2 overall and 6-2 in conference play while capturing third place in the Pac-10 and a trip to the Sun Bowl. That was when Karl Dorrell led the group, but that has changed.

Now, third-year head coach Rick Neuheisel is looking to place his stamp in Westwood after having had a winning mark of 7-6 in 2009. His dilemma lies with the increased competition of the Pac-10 Conference, which has improved via Oregon, Oregon State, California and Stanford. Oh yeah, then there is that rival across town who is filled with talented players on both sides of the field.

Neuheisel charged a 3-6 record in conference play last year, with their two most convincing victories arriving at Washington State, 43-7, and at home versus Arizona State, 23-13. The Bruins actually began the season at 3-0 after solid victories over San Diego State, Tennessee and Kansas State. However, as soon as conference action started, UCLA endured five consecutive losses.

The fact of the matter is that the Pac-10 is strong, and UCLA seems to find trouble with its West Coast competitors. In their season finale, the Bruins suffered a 28-7 defeat to the Trojans. They then brought the EagleBank Bowl home after a 30-21 triumph over Temple in late December.

In reality, it appears that the Bruins might have a breakout season this fall, but that depends especially on how they maneuver in their top four toughest games. On Sept. 25, they travel to the Lone Star State and face No. 4-ranked Texas. This is arguably their toughest affair of the entire campaign simply for playing against a powerhouse team, being on the road in the humidity and Texas’ arduous fan base.

UCLA’s next difficult confrontation comes when they travel to Eugene, Ore., to face the No. 11-ranked Ducks on a Thursday night, Oct. 21. The other two dangerous games are at home, with the first being on Nov. 6 versus the No. 22-ranked Oregon State Beavers. And then there is this meaningless affair against their crosstown foe.

Not really! Neuheisel’s career and future could very well depend on how the Bruins perform against the Trojans in the season finale on Dec. 4 at the Rose Bowl. Under Neuheisel, the team has gone 0-2 against USC. At the end of the year, however, the Bruins could be a solid team at 8-4 or 9-3, or they could easily be another mediocre squad that goes 7-5, 6-6 or 5-7.

On the offensive side, the star and leader of the group is sophomore quarterback Kevin Prince, a native of Los Angeles. Prince suffered several injuries last year, but still managed to compete in 11 games. He totaled 2,050 passing yards and eight touchdowns, but threw eight interceptions as well. Prince is obviously still under development.

His most prominent game came on the road at Washington State with a 43-7 pummeling of the Cougars. Prince collected 314 passing yards on 27-of-40 attempts for one touchdown; he went to accumulate 76 rushing yards and one score on just five rushes.

“I’m fired up about our quarterback. I think his numbers were fairly, fairly good for a guy who hadn’t played [that much]. Remember, he didn’t play as a senior (at Crespi) High School. He lost his senior year to a knee injury,” Neuheisel states to the Los Angeles Daily News about Prince’s 2009 season. “For a guy who hadn’t played on two seasons, to come in and play like he did was admirable. Certainly, there were growing pains, but I do believe he’s done the necessary work to master the offense, especially in the throwing game.”

Just like the team, Prince too could have a breakout season.

“He’ll come into his own in this running game because he’s got the measurables to be successful as a quarterback for this style of offense,” Neuheisel adds. “It’s fun now to finally have an experienced quarterback coming back to play. That coupled with experience on the offensive line lends to more optimism.”

And that could rely on the mastermind behind the offense, offensive coordinator Norm Chow. He is the best OC in the conference and perhaps the entire country. Chow is better known for his victorious days at USC when Pete Carroll was at the midpoint of his career with the Trojans. Chow then took a job with the NFL’s Tennessee Titans as offensive coordinator, but quickly returned to college football. Neuheisel hired Chow at UCLA with no hesitation.

Chow is a dynamic mastermind behind the formulation of plays. This is no secret, and no defensive coordinator can ever stop Chow. However, Chow’s biggest concern is the squad’s underdeveloped players. The reality of it all is that other teams have better talent. Imagine if Chow was still at USC? Hmm.

On the other side of the ball, the Bruins are strong defensively. Their best asset is free safety Rahim Moore, who is perhaps the best in the nation. Moore totaled 45 tackles and 10 interceptions as a sophomore. He is now a junior and can only get better if he stays healthy. Junior linebacker Akeem Ayers is also returning for another year.

The defense is a concern though, because it is basically starting from scratch. Freshman defensive end Owamagbe Odighizuwa could spark things up.

“Anybody can read a play and know you’re supposed to go here or here or here, but in a game situation, the tempo is a lot faster, things are moving quicker,” Odighizuwa tells the Los Angeles Daily News. “Your mind is moving a million miles an hour, and you have to just slow it down in your head. It will all make sense and look like what you’re drawing up on the board. The more experience you get, the more similar it gets from the page to the field.”

UCLA seems set defensively because of their few experienced athletes returning en route to evolving a stingy defense, but the question lies with the offense. How well they perform is yet to be determined, but their season opener on Sept. 4 at Kansas State will showcase everything one needs to know. UCLA, however, is probably on the brink of breaking out or underachieving yet again.