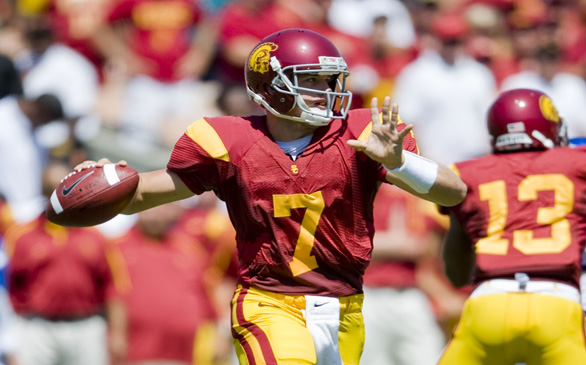 When it comes to athletics, football is the most celebrated sport at the University of Southern California. The Trojans have a rich tradition of winning, and success is in their blood most of all. They wear extravagantly nice uniforms, and they have the best-looking helmet in the Pac-10 Conference.

Nonetheless, a series of unfortunate events involving the Trojans has people questioning their traditions and success. Pete Carroll stepped down as head coach, but some individuals speculate whether it was truly time for him to move on to the NFL rankings; he is now the head coach of the Seattle Seahawks. Then USC’s athletic director, Mike Garrett, made an unorthodox and unpredictable move that stunned college football: He hired Lane Kiffin to lead the Trojan pack.

Kiffin has yet to prove himself as a true leader, yet alone as a head coach. His stint with the Raiders from 2007 to 2008 was a failure. When he was at Tennessee last year, he gained confidence from many with how the program finished the season. However, that was instantly eradicated when resigning from the program en route to take the one at USC.

Is this guy loyal? Is this person for real? Can he lead a team to success? All three questions will be answered in time.

Regarding Kiffin, who is young and has a lot of room for improvement, three things are for sure: 1) He is hated in Tennessee. 2) Now more than ever before, he is definitely in the spotlight. 3) He has put together a great staff to create a winning program for years to come.

More friction came to light when the NCAA sanctioned the program in a tremendous manner upon the findings regarding former running back standout Reggie Bush, who is now a Super Bowl champion with the New Orleans Saints. The NCAA mentioned that USC lacked institutional control. Seven sanctions were delivered to USC, but the most prominent that will hurt the team the most are the two years of banned postseason play, a loss of 30 total scholarships from the 2011 to 2013 seasons and the vacation of all victories claimed in the 2005 season and its Jan. 4, 2005, National Championship win over Oklahoma.

Back in June when the sanctions were handed down, Bush issued a statement.

“I have a great love for the University of Southern California and I very much regret the turn that this matter has taken, not only for USC, but for the fans and players. I am disappointed by today’s decision and disagree with the NCAA’s findings,” he stated.

After the sanctions and another questionable Kiffin moment, Garrett has been replaced as athletic director by businessman and former Trojan quarterback Pat Haden, who took the position effective Aug. 3.

And now there is the upcoming 2010 season to worry about. For years, USC was the safest selection in predicting who could reign in the Pac-10. Not this year, and probably not next year, either.

This is primarily due to the reputation it has captured since the NCAA delivered the sanctions. The program’s biggest asset in Carroll is gone for good. Carroll was the sole purpose why USC achieved so much greatness during his tenure there. He coached. He led. He inspired. On top of everything, however, he recruited the best high school athletes nationwide.

The Pac-10 Conference has been colossally and unexpectedly reshaped in many ways. Oregon, ranked No. 11 in the preseason coaches’ poll, is top dog now. Both Northern California teams – Cal and Stanford – have substantially improved in the course of the last two years. (Stanford comes in at No. 25 on ESPN.com’s power rankings.) No. 22-ranked Oregon State has become a powerful force, while UCLA is heavily increasing its overall team value. Both Washington and Washington State are dangerous competitors, while Arizona and Arizona State are solid opponents for the Trojans.

ESPN.com has USC ranked 15th in their power rankings, and the only imaginable and reasonable purpose for this is because the Trojans are simply stacked with talent all around. The question marks lie with Kiffin, and perhaps the lack of motivation for the players to compete at their best since they will see no bowl action for the upcoming two seasons. Nevertheless, look for Kiffin to energize these young athletes to pursue and accomplish what no one in the nation is counting on them to do anymore, which is win and win by good numbers as they have done so successfully in the past.

Offensively, quarterback Matt Barkley is the leader. Barkley had a solidly impressive freshman year. He became the first true freshman to ever start at that position for the Trojans en route to throwing for 2,735 passing yards and performing 15 touchdown throws.

Barkley’s two biggest games came on the road when USC traveled to Ohio and Indiana. Against the Ohio State Buckeyes, Barkley collected 195 passing yards and led an 86-yard drive late in the fourth quarter to eventually capture the 18-15 victory.

Then, over a month later, Barkley threw for 380 yards on 19-for-29 attempts and accumulated two touchdowns against Notre Dame. The Trojans defeated the Fighting Irish by a score of 34-27.

Now, after an entire season under his belt, Barkley is looking to create some national buzz for his skills and talented play.

Defensively, tackle Jurrell Casey leads the charge. He could very well see All-First Team selection after the season ends. Casey had 54 tackles and forced two fumbles last year as a sophomore; he is a star-in-the-making. Although the team lost 47-20, Casey’s biggest game came at Oregon when he pounded out 11 total tackles, including five unassisted tackles.

Both Barkley and Casey are essential assets to USC, and they must use their talents to motivate the rest of their teammates. The Trojans have some issues that will be fixed eventually. But for now, they must depend on themselves alone to succeed as a team, especially to get the university’s program back on track.

Kiffin will always be Kiffin, but he has the tools necessary to succeed and earn numerous victories. USC could very well win the conference, but a second or third place finish is most probable for them. If the program does not win, however, then they’ll at least still have the best-looking helmet in conference once the season ends.