Struggling to Keep Up with the Joneses 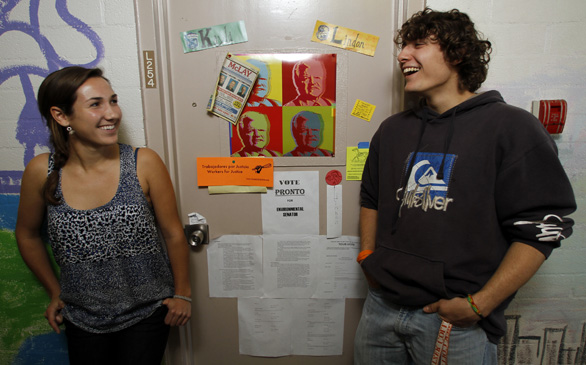 Some friendships are more toxic than others.
(Credit: Irfan Khan/Los Angeles Times/MCT )

Leah calls her best friend Manny a “frenemy.” She learned the term from an old episode of “Sex and the City.”

“They’re like, when you have a friend but you sort of hate them at the same time,” she says.

Why is Manny a “frenemy” and not a friend?

“He’s always copying me,” she says. “Let’s just go down the line: I got laser eye surgery; he went out and got it and keeps bragging about how much more fancy his [procedure] was than mine. I started renting a house; he’s breaking his neck to try to do the same. My boyfriend popped the question, and I accepted; Manny’s going this weekend to propose to some girl he just started dating two months ago.”

Leah’s friendship woes are a common occurrence. Ever since Biblical times, man has sought to one-up his neighbor, eventually resulting in the popular idiom: “Keeping up with the Joneses.” But how far is too far? Is a friendship really worth the annoyance of dealing with competition? Sandy Jista says, “No.”

Her friendship with an envious classmate led to negative repercussions.

“Krista used to be my best friend, but she always seemed to be interested in what I had. ‘How much did that cost?’ ‘Where did you get that?’ ‘Mine is better,’” recalls Jista.

After receiving a large financial gift for graduating college, Jista treated herself to a shopping spree. She showed her friend some of the items she’d purchased for herself, including a diamond and pearl pendant, which comprised the bulk of her spending.

“We went out that night, hung out. Everything was fine. But then I couldn’t find my necklace when I got home. I asked her point blank, ‘Did you take it?’ She looked at me and said, ‘No.’ But I knew it was her. But I couldn’t prove it. Then almost a year later, she was walking around with the same necklace on – saying she got it from her new boyfriend. And then she was carrying around basically everything I’d bought for myself. She didn’t steal the other stuff, but it was still wrong what she did.”

After their confrontation, Jista promptly ended the friendship.

“It’s one thing when you’re so lame that you’ve got to copy everyone else. But [then] you start stealing to keep up?” she says.

However annoying it is to be the person the world is trying to emulate, researchers surmise that it’s simple human nature. Thalia Enriquez is a sociology student who has studied the subject extensively. She feels that competition among friends and neighbors can be healthy.

“People don’t come into the world knowing stuff,” she says. “We learn through example.”

She even feels that some competition can have long-term benefits.

“If you make good choices, then people around you who may be copycats can learn from your good example.”

Still, Enriquez notes that the frustration from such behavior can be tiresome, and doesn’t fault individuals who walk away from competitive friendships.

“Our basic need to compete stems from paranoid-narcissism. You think everybody is sitting around thinking they’re better than you. Your ego kicks in and you try to one-up them. It’s probably not the most fulfilling way to live at the end of the day. I mean, how much enjoyment can you get from life if your accomplishments are based on somebody else’s dreams?”

She suggests confronting the issue with friends.

“You just have to tell them that you don’t like what they’ve been doing. Real friends will hear you out. If they don’t, then you have some thinking to do, don’t you?”

As for Leah, she’s still friends with Manny and doesn’t foresee the nature of their association changing any time in the near future.

“A couple of months ago, when we were at breakfast, I passed a Toyota Prius and said I was thinking about upgrading – you know, for the environment? Then last month, I was on Facebook and that idiot had pictures of his new car – a Toyota truck – all over his wall. I was thinking, ‘At least he had some originality this time.’”