Scott Pilgrim Gets a High Score 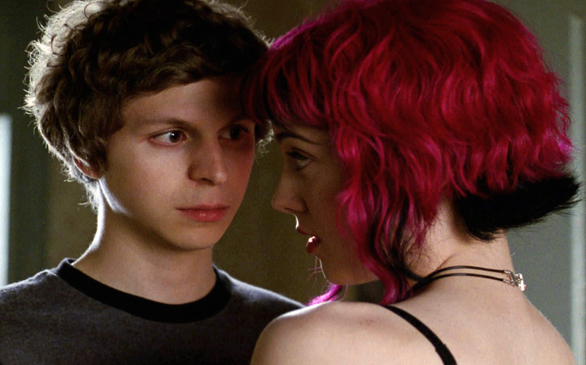 Scott Pilgrim vs. the World is a film you can watch again and again.
(Credit: Kerry Hayes )

Nowadays it’s rare that I go to a film and see something that I would consider “new.” To a certain extent, everything has been done and every story has been told, so ultimately in order to do something new it’s not really about “what” you do; it’s “the way you do it.” What kind of spin can you put on the story or style in which you tell that story?

Last week I went to see Scott Pilgrim vs. the World, and when I came out, I felt that I had seen something new. Something I hadn’t seen before. Scott Pilgrim is a film that is a cohesive vision from the mind of a passionate filmmaker. As a writer/director myself, it’s nice to see a film where the star of the film is the director. Edgar Wright (Shaun of the Dead, Hot Fuzz) has crafted an awesome ride that, believe it or not, has it all. It has action, humor, amazing visuals, martial arts, cool special effects but above and beyond all that, it has an interesting story that I haven’t seen before. Another thing I love about the film is all the awesome video game references.

The film is based on a comic book of the same name, and it references a lot of ’80s video games. Wright has done an excellent job of translating the classic video game nostalgia to the big screen, and what’s great is it works and is fun to watch, even if everyone seeing the film isn’t familiar with all the old games being referenced. Again, this was something I hadn’t seen before in a film.

Normally, a film like this has a storyline that is a lot more typical – typical good guys, bad guys and some kind of plot to destroy or take over the world. What makes this film unique is the way it’s told. The story is about Scott Pilgrim, a 22-year-old kid who falls in love with a girl named Ramona Flowers, but in order to have her all to himself he has to defeat her seven evil ex-boyfriends (which includes one girlfriend). It sounds wacky, but if you’re not closed off to stuff that isn’t tired, overdone crap, you should have a great time with this film.

Although most every film gets test screened besides sure thing blockbusters starring massive movie stars, Scott Pilgrim is not a film crafted together by a marketing department. When you look at the movie business now, it seems like the marketing department is the artist. That’s why so many films are sequels, remakes and reboots; it makes the marketing department’s job easier so they don’t have to figure out how to sell something new or unproven. So much is invested in the hype and build up to a film that the marketing departments are responsible for creating with the desired result of the film debuting at No. 1, breaking records and making a fortune.

What sucks is that if a film doesn’t do that, the media deems it a failure. The people who report the box office would have you believe that the quality of a film is directly linked to the amount of money it makes during its first weekend.