DateAHuman.com: Is the Internet the future of TV? 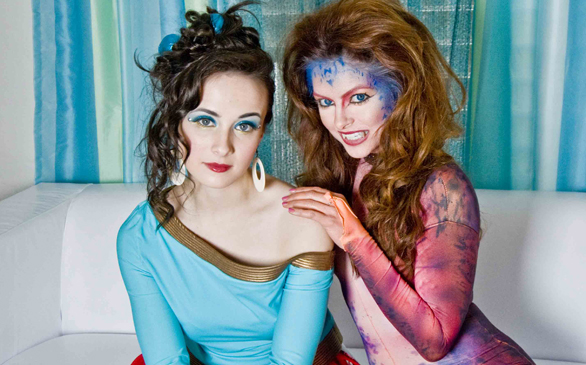 DateAHuman.com marks a trend developing in Hollywood where a Web series can go straight from your laptop to a network TV’s fall lineup.

What if in the future aliens roamed the Earth and humans became the minority? Friendly aliens, of course, sexy aliens – the kind of aliens you might even want to date.

Welcome to the world of DateAHuman.com. Director Joy Gohring is shaking up the sci-fi genre often dominated by male storylines with an idea as old as time: finding love in our ever-changing world. From hot Cat Ladies to Alien Crab Puppets to hilarious Cocoon Sex, it’s a fun romp, and it’s easy to see why its popularity is gaining.

Gohring is as a cheerful as ever, and why wouldn’t she be? She’s fielding offers from studios to make DateAHuman into a television series. With the growing trend of Web series becoming Hollywood’s new TV pilot, Gohring provides answers on new media crossing over. For those looking for a way to break into the entertainment industry, she also has some delicious tips.

How did DateAHuman come to life?

Babelgum.com’s Executive Producer for Comedy Development, Amber J. Lawson, knows my work as a stand-up comic and from watching my short films. She approached me to create female-driven content, but when I found out Babelgum was also looking for sci-fi, I got all tingly inside. I was already writing comedy sci-fi with a group called FunBoxComedy.com: Paul Malewitz, Matt Roop Kharasch and Will Weissbaum, also the co-creators of DAH (DateAHuman). We got together and brainstormed a bunch of ideas that made us laugh and then pitched them to Babelgum.

Did you ever think of doing a Web series before DAH?

Yes, I did a show before called KimforPresident.com. I’ve worked on several super low-budget Web series since 2007. I’d like to think that each time I got better at what I was doing. Finally, someone (Babelgum) took notice, broke down and gave me some cha-ching to actually do one the way I really wanted.

Did you realize that a Web series like DAH could be used as a potential pilot?

Yes, in fact, I put a lot of love and attention into DAH so that it would help me get another job as a writer/director. I did my best to focus on detail. I wanted our audience to see the detail in our production design, our characters, makeup and FX. We reached out to some amazing talent to be in the series, which has really helped us, including Phil LaMarr (“MADtv”) who plays the Crab Alien voice and Charlie O’Connell (“The Bachelor”). Anne Griffin plays our heroine “Allie,” who is searching for love, and Brooke Lyons plays her sexy catlike alien roommate, “Ruthie.” I wanted TV executives to watch DAH and get excited about the world we created and say, “Hey! They really look like they know what they’re doing!”

Other than the fact that Babelgum mentioned sci-fi as one of the genres they were looking for, why did you choose the sci-fi genre when you could have focused on something else that Babelgum distributes?

I’ve always loved sci-fi. Mainly, I wanted to challenge myself to do something with visual and special effects. Plus, good sci-fi allows for a social bent, and in the series we not only explore the future of dating but the future of racism as a reflection of our current society. Allie’s mother, played by the fabulous Cathy Shambley, is racist towards aliens. But Allie is looking for love, regardless of race, religion or social background. There is more to life for her then simply procreating the human species. She wants true love. Who doesn’t?

What are you future plans for DAH?

Several production companies have approached us, and we’re sorting out where the best home is for DAH. We’ve even thought, maybe we should do more online episodes and continue to build up our fan base? So many people get TV pilots made, but never picked up. We really want someone on our side at a network that gets us and really wants to nurture the show.

Do you plan to do any other Web series?

Yes, I directed two other series that are in post-production. One is called “The Morning After,” which is “Sex and the City” for 20-year-olds, and the other is a sci-fi thriller.

Do you have any advice for someone looking to do a show on the Internet?

You never know what will pop. If you have a fun idea, beg, borrow, steal or buy a camera. You can buy an industry standard camera on Craigslist now for under $1,500 these days. Or simply use what you have – your Flip camera or iPhone. Write some scripts, and go out and shoot it. (Keep them two to four minutes/pages.)

Don’t limit yourself to thinking you need thousands of dollars to shoot something. I’ve created entire web series with little to no budget. You can edit for free using Mac software and literally do everything out of your home. If you want your own Web page, you can get one from some place like Yahoo for $10 a month, or you can post your series for free on YouTube.

If you want to do a Web series, don’t stop at two or three or even six episodes; do at least 12. Oh, and tell everyone about your show so people actually watch what you’ve done!

What’s some advice you can give to college students?

I recommend making what you shoot look good. This means, don’t just shoot a scene in front of your white bedroom walls because that’s all you have. Get more creative. Buy one less beer on the weekend; go out and buy some paint or fabric. Don’t shoot a futuristic sci-fi scene with your “Family Guy” poster hanging in the background. Make sure that what you’re shooting makes sense. This will help you stand out from the crowd. That’s truly what has made DAH stand out.

As you get more serious about shooting videos, take the time to make your project sound good. Invest in a separate microphone, what’s called a boom mic, that plugs into your camera. This is much different that normal ‘in camera’ sound.

No matter what, just make something! You’ll get better if you’re consistently creating. The only way to learn is by doing.

Any advice to women looking to breaking into the entertainment industry?

The key to success is collaboration. Women can be unnecessarily competitive sometimes. Support women, bring each other up and that is how you will ultimately succeed. Both of my producers, Kimberly Simpson and Lauren Schnipper, are women. We balanced each other out and kept each other on track. It is a great time for women to be in this business. There are so many opportunities for women in film right now. I graduated from the American Film Institute based on a scholarship I received that was only offered to women. Repeat after me: Google search is your friend. Type in what you want to do and see what comes up. And remember, women, you are 50 percent of the population – we want to see and hear from you.