My Appetite for Destruction: Q&A with Author Lawrence J. Spagnola 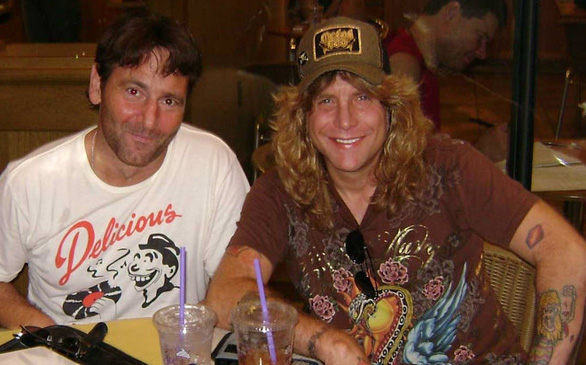 Lawrence J. Spagnola, co-author of the Steven Adler memoir My Appetite for Destruction: Sex & Drugs & Guns N’ Roses, will be signing copies of his book on Aug. 30 at the Whiskey A Go-Go (Adler will be performing.). Adler is the former drummer of Guns N’ Roses.

You wrote about a rock star who battled with addiction at a young age, during a time of sex, drugs and rock and roll. How do you think today’s generation differs from Steven Adler’s generation, or do you think we have not changed since the 1980s in terms of these topics?

Lawrence J. Spagnola: Steven fully embraced the iconic vision of “The Rock ’n’ Roll Star.” It was a concept that was bigger than life, grandiose, immortal. And Steven lived in the perfect time for its gestation.

By that I mean that the ’70s into the ’80s were a time of excess. Tom Wolfe infamously labeled it the “Me Decade.” This is opposed to the ’60s when people were more into self-sacrifice and dedicated to causes that they believed could build a better world. Steven possessed the right attitude for the times, the adulation-without-guilt pursuit because he knew in his heart of hearts this was the only way to achieve true Rock Star status and acclaim.

Any deviation, any faux humility or tortured soul façade would be a sham, a disservice to what rock ’n’ roll meant to him and his heroes. This included their legendary capacity for consuming MASS QUANTITIES. We must remember that Steven’s first idols were drummers from the ’60s (Keith Moon) and ’70s (John Bonham) who excelled and were eventually done in by their excesses.

Regarding today’s generation, I think that a certain amount of abuse still exists, but it is less apparent, more clandestine because musicians know the industry has learned its lesson. Music execs are less apt to invest in an artist who can off the rails at any moment, and waste the efforts and cash required to launch a successful band.

In a way this is more hypocritical, and that is why many rock enthusiasts pine for past decades when rock artists bared their souls, whether it be a Jim Morrison or Kurt Cobain.

What was it like for you as an educated author to listen to Adler talk about his youth as a rock star, not going to school and living the life of fame?

Steven and I discussed our different paths at length, and he is very aware that his journey was an exception. For every young, hungry musician that experienced success, particularly of Guns N’ Roses’ magnitude, there were thousands of performers who struggled mightily, only to be forced to abandon their dreams and return to dreary day jobs, punching the clock of servitude.

There is a part of me that envies Steven’s ability to strike out on his own and successfully pursue his dream. But I am also aware that Steven never experienced the kind of love affair a child can have with books and learning. My parents were strict, and my brother and I were brought up to apply ourselves and excel in the classroom. We were allowed to go out for sports and blow off steam, but only after the schoolwork was done, and painstakingly done right. My mom was valedictorian of her high school class, and my father was the only college graduate among six children raised by illiterate but hard-working parents.

Steven may have never had a parent to check his math homework, but he had the discipline to apply himself and spend hundreds of hours at the drums exploring and perfecting his own style. He never doubted that his day would come, and in that regard, we’ve agreed that we’re similar. Possessing an unflagging determination to triumph is one of the most essential elements of success. If you never quit, you will never know failure.

What advice do you have for college students after writing about Adler’s life? How important do you think it is for people to stay in school?

Steven was fortunate to have discovered his passion at an early age. Before entering his teens he was already determined to become the best rock drummer in the world. He was resourceful enough to gain access to clubs where he could study the technique and style of great rock drummers as they performed.

But for many young people, their passions are not identifiable at such an early stage. School is where it can be found. It’s frustrating for many students, however, because the applicability of the material you learn may not be apparent at first. It will, however, surface in time.

Personally, I believe that mastery of the written and spoken word, communication, is vital. Being able to express yourself articulately is one of the key accomplishments of a good education. It would have helped Steven avoid a lot of pain and loss when it came to dealing with lawyers, managers, accountants and power brokers in the music industry.

Perhaps of greatest importance are the classmates you meet in college. They will be the friends you cherish for the rest of your life. They will be the ones that you can go to for advice and assistance in times of need. They will one day be your neighbors, ushers, maids of honor and godparents to your children.

I think that one of Guns N’ Roses’ key contributions was in fashioning a contractual understanding with their label that gave the band complete and exclusive creative control of their music. We have to remember that this was unheard of at the time.

Hugely successful bands did not have this freedom. Another pioneer was Paul McCartney, who openly laments the day he heard the string section that was added on to “The Long And Winding Road” without his permission as the moment he knew he had to sever his tie to the Beatles and move on as a solo artist. He was finally in a position to command total control over his music. And it was a timely decision. Can you imagine anyone fucking with the raw, minimalist perfection of a tune like “Maybe I’m Amazed?”

I think that GNR’s greatest contribution, in this capacity, was showing the world that a band could have this control and use it to create incredible, stunning music that was also commercially successful. That in [and] of itself is a momentous achievement.

After learning so much about Adler, do you think his actions affected the music industry and, if so, how?

I believe that Steven’s courage and determination to reclaim royalties to the songs he contributed to from Appetite For Destruction, after they were taken away from him, should be an example to all artists to protect your work. Steven showed us to never give up fighting for what you believe you are entitled to for your creations.