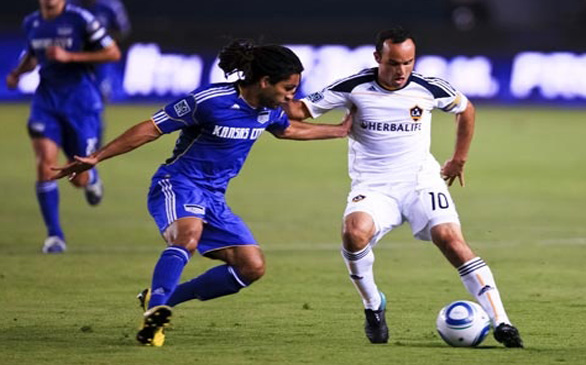 For the second consecutive weekend, the L.A. Galaxy suffered a shutout loss (2-0), but this time it arrived as they hosted the Kansas City Wizards at the Home Depot Center.

“I think that we got outcompeted. All this was about tonight was fighting and scrapping, and we lost that fight. I think that was the difference in the game; they played harder,” Galaxy head coach Bruce Arena says.

The Galaxy (13-5-4, 43 points) surrendered an early goal before the 15th minute mark, and they could not recover thereafter. Wizards midfielder Kei Kamara ran through the right flank before sending a through ball into the box where midfielder Davy Arnaud connected for the goal.

“I think it’s very important. We’ve seen during this year that, generally, when we’ve gotten the first goal, we’ve gotten positive results,” Arnaud states on the early score. “Tonight it happened, and for us to get on top about 10 minutes in was a good time for us to get a goal. It was a great ball that Kei played to me for a goal.”

Kansas City (7-9-5, 26 points) defended solidly against the second-best offense in MLS. To top that, forward Edson Buddle seemed unbalanced in attempting to gain a rhythm on the pitch, but the Wizards took care of that from beginning to end.

In the second half, Los Angeles’ midfielder Chris Birchall had two clear scoring opportunities, but the Wizards’ goalkeeper Jimmy Nielsen stopped Birchall’s potent shots. Defender Jimmy Conrad added the next goal for the visitors off a header in the 70th minute.

Both Juninho and Gregg Berhalter did not play due to visa and illness problems, respectively.

“We missed Juninho and Gregg quite a bit. I think that Gregg’s leadership in the back helps,” midfielder Landon Donovan states. “Juninho’s ability to pass the ball really helps us, and I think that we lacked that a little bit tonight. They both would have helped a lot.”

Los Angeles travels to Chicago this Saturday, Sept. 4, visiting the Fire in a 1 p.m. kick-off.