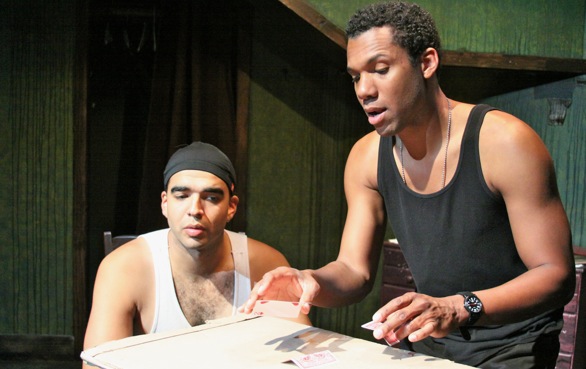 What do you get when you put family rivalry, the unresolved past, racism, poverty, alcoholism, gambling and heartbreak all in one pot? “Topdog/Underdog.”

“Topdog/Underdog,” written by Suzan-Lori Parks, the first African-American woman to win a Pulitzer Prize in drama for her work, is a perfect portrayal of what happens when matters of the heart are thrown to the wayside, questions are unanswered and resentments build.

A.K. Murtadha (Lincoln) and M.D. Walton (Booth) earnestly portray two brothers who are at their wit’s end with their own personal drama as well as each other. The audience watches as the two use the game three-card monte as a way to disappear from reality and as fuel to burn each other’s thick skin. The two dance a fine line between brotherly love and family rivalry, which takes spectators on an emotional roller coaster.

Murtadha plays the older brother who wears his loneliness, shame and defeat on his sleeves while still playing the games that siblings use to get at each other’s core. Walton is the younger brother who is caught in a fantasyland of what life was and what the future holds but is able to somehow remain present to the truth that they need each other. Watching these actors on stage is like witnessing a volcano about to erupt with nowhere to hide for cover. You know there’s going to be an explosion, but no one knows what the real damage will do?

The play is pleasantly disturbing as these two actors reveal who they are individually and why they are consumed with so much rage and raw emotion. At times, the comedic undertone has the audience laughing despite the heat that is being felt between the two.

Director Marty Papazian creates an environment that is not only realistic but has a sense of intimacy that draws the audience close as if eavesdropping on a neighbor’s drama. There is also a pace and tempo of the play which Papazian establishes that seems to make quick turns and changes that add to the audience’s ride.