Going the Distance: Drew Barrymore and Justin Long put their love on the line. 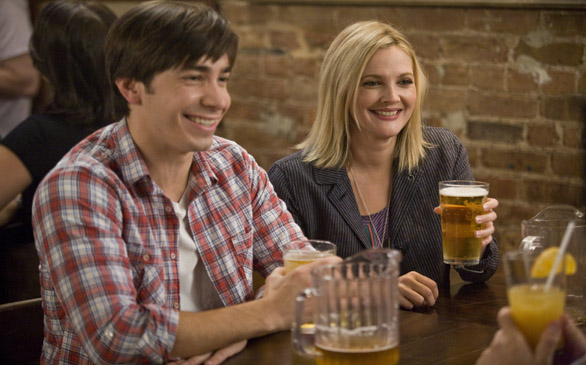 After years of having their on-again, off-again relationship documented by prying paparazzi lenses, Drew Barrymore and Justin Long are willingly stepping in front of the camera to experience it all – romance, passion and heartbreak – in their raucous, raunchy romantic comedy Going the Distance.

Barrymore stars as Erin, a wry, sardonic 31-year-old intern at a New York newspaper who meets chronically single Garrett (Long) one hapless night at a bar. After bar trivia and bong rips, the twosome decide they’re perfectly matched for a meaningless summer fling before Erin returns to grad school at Stanford. But six weeks later as she’s about to board a plane across the country, they find they’ve fallen hard for one another and decide they’re willing to suffer a fate worse than death – a long-distance relationship – in order to stay together.

Incredibly frank, biting and funny, the film gave Barrymore the chance to step away from the perky flower power parts already in her arsenal and play a woman with a more cutting, derisive, profanity-laced brand of humor.

“I just wasn’t in that place in my life where I wanted to play a cuckoo, wacky role,” Barrymore says, twirling a strand of blonde hair.

In an unbuttoned sheer plaid blouse over a slouchy tank top and studded belt, sporting a slash of maroon lipstick, she looks more like someone you’d find hanging out backstage at the Echoplex than an entertainment mogul with titles like producer, director and movie star on her resume. But isn’t that one of the things that makes her so admirable?

“I wanted to play someone who could hang out with guys but loves women, has spine and is funny,” she says. “I feel like I relate to that kind of person. To get to improv and work in a much more free-flowing way where you could play around and didn’t have to be censored, because [we] had an R-rating; that, to me, was just an absolute pleasure.”

Going the Distance feels much more personal than many roles audiences have seen both Long and Barrymore in, and while some of that can be attributed to their history, it’s also due in large part to director Nanette Burstein, an Academy Award nominated documentarian whose previous films include On the Ropes, The Kid Stays in the Picture and American Teen.

For a montage of the couple falling in love, Burstein took her two stars out on the streets of New York for some guerilla-style, unscripted footage shot with a digital camera. Though there are moments where it can be slightly reminiscent of the new Match.com ads that follow Internet couples on their first date, there’s a spontaneous immediacy to the almost surveillance footage, and the couple’s chemistry is palpable. Over one date, Barrymore, in a Chippendales-style bowtie, eyeing her man seductively, peppers Long with those imperative first-date questions like, “What three albums influenced you the most?” “What’s your favorite food?” “How would you like to die?

Reissuing the question to the actors, asking which three films are some of their favorites, Barrymore’s brain grinds to a halt.

“Oh! It’s like when someone says let’s go to breakfast and it’s like you’ve never eaten before, your brain just goes blank. Umm, Annie Hall, Lost in America and Sullivan’s Travels,” she fires off, turning to her co-star for his response.

“I’m gonna go: Annie Hall, Back to the Future and Way Out West,” Long says, neither one realizing they’ve both listed one of Woody Allen’s finest films.

While there’s no official word if Long and Barrymore are still dating, their ease together and affinity for one another is plain to see and that was a major advantage during their time on screen, especially during the kissing scenes.

“Sometimes it can be a surprise when you’ve never kissed someone before,” Long explains. “People have different ways of kissing, and it can be jarringly uncomfortable.”

“I was just lucky because he’s a good kisser, so I was like, ‘Phew, thank God!’” Barrymore beams. “It’s the worst when you’re kissing someone who’s not a good kisser and you’re trying to make it look good and you feel like you’re just working on your own. At least this was a real team effort.”

“She’s a great kisser, too,” Long blurts, before adding, sheepishly, “I just wanted to say.”

In one of the film’s best scenes, Erin and Garrett are trying to be intimate over the phone. Perhaps the greatest part is when Barrymore tells Long she’s imagining he’s wearing white boxer briefs, à la Marky Mark, a line Barrymore relished.

“I was so excited to hit that. I really wanted to hit it hard,” Barrymore says in a major “That’s What She Said” moment. Not long after filming the scene, she continues, “I ran into [Mark Wahlberg] at an award show and I was like, ‘I just talked about how hot you are and your underwear and you’re friggin’ sexy’ and mmm—”

“In his defense, it is a strange thing to just come up and say,” Long offers. “I don’t think he was prepared for it. But I think he was flattered.”

“Who would not be excited about that?” Barrymore asks. “And he’s a very nice guy. I’ve had other conversations with him that went much better than that.”

Gathering herself, she continues, “That was a great scene, and I was really excited to go out and try it because I thought, this is one of those scenes that’s either going to fail miserably and be a really gross, upsetting moment. Or it could be exciting. You just had to go for it not knowing if it was going to work.”

Without question, it’s a scene that’s sexy and uproariously funny, but also very truthful and real. It pushes the audience’s comfort level because it is so honest and uncensored. But it also pushed the actors as they filmed it.