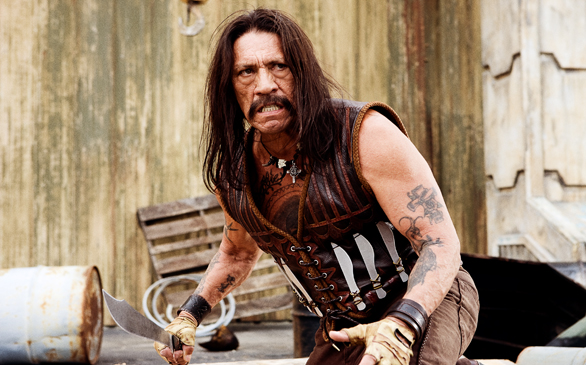 Danny Trejo is Machete, a legendary ex-Federale with a deadly attitude and the skills to match.
(Credit: Joaquin Avellán)

Mexicanos y Mexicanas; Latinos y Latinas; Morenos y Boricuas – hell, anybody out there who is of Spanish descent or a fan of the culture, your time has come! Put away your DVDs and comic books clad with black-and-white superheroes and stand proud. Jive suckas everywhere will soon be uttering a new name as they taste the steel blade of justice. That name is Machete!

Director Robert Rodriguez first brought the larger-than-life title to the big screen via the 2007 hit Grindhouse (and his installation in the film, Planet Terror). When audiences saw the Machete trailer during the film, many were amused by the campy one-liners and gruesome badassness it portrayed. But soon, Rodriguez realized that there was something deeper about Machete that resonated with audiences.

“People would come up to me and ask, ‘Are you going to make that movie?’” recalls Rodriguez. “And I would respond, ‘Yeah, of course we’re going to make it,’ – although I really had no firm plans to do so – because I didn’t want to let them down. They were genuinely excited to see the entire film be made.”

That enthusiasm was due, in part, to the rousing performance given by actor Danny Trejo. With his long hair, weathered face and stone cold persona, Trejo gave fans what they’d been longing for all along – a Latin movie hero.

“The fans were everywhere,” says Trejo. “When I was in England a few years ago, I was stopped by two guys who had tattoos of the character Machete on their backs. When I signed my name above their tattoos, they had my signature tattooed as well.”

So Rodriguez rounded up his makeshift repertory team of players (such as Trejo, Jessica Alba, Lindsay Lohan and Cheech Marin) and added a few new names to the mix (Robert De Niro, Steven Seagal, Michelle Rodriguez) and wrote them into what is, perhaps, one of the funniest, most violent nods to ’70s exploitation flicks in Hollywood history.

“The cast may have sounded bizarre to some people when first announced,” notes Rodriguez, “[but] the eclectic mix really works.”

As most stories go, Machete’s is especially grueling. During his youth, he lived a tough life on Mexico’s streets. Once adulthood rolled around, he became a Federale with a penchant for bringing people to justice with the use of his namesake, the machete. Machete is set up for a crime he didn’t commit and must clear his name with the help of a beautiful immigration officer (played by Alba). Together, the two fight to bring the bad guys to justice. This means exposing the dirty deeds of a racist right-wing senator (played by De Niro), several crooked thugs and a drug cartel chief (played by Seagal) who has instigated many of the events that have led Machete on his reign of vengeance.

Machete also enlists the help of a few of his closest friends – the undocumented workers fighting for their own freedom in the good old U.S. of A. Led by Luz (Michelle Rodriguez) – a smoking hot taco truck lady – Machete and “the network” do things that Dirty Harry and Dolemite could have never accomplished. Oh, and he even manages to drop a little lovin’ on the ladies in the process. But even his tender side comes with consequences.

“Machete is a man of very few words, but when he does say something, someone’s gonna die!” says Trejo.

Although there is no official death count in the film, Rodriguez wants moviegoers to know that some characters – even the ones who may have been brutally maimed or injured – could return in future installments of the series. And for film fans who have long awaited such a hero, born from el barrio and raised on blood, Machete will be worth the wait.

“There weren’t any action movies with a Latin flavor that could play to a broad audience,” notes the director. “When I watched John Woo’s movies, they made me want to be Asian. Woo and Chow Yun-Fat’s Hard Boiled and The Killer really inspired me to make films that would create that feeling in the Latin arena.”