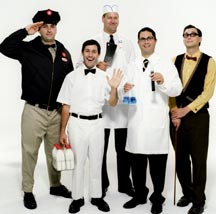 Jesse joined the band at the mixed-up age of sixteen, and now he had a difficult decision to make. High school days were over, and visions of the future ricocheted in his head. With mind made up, he went to tell his parents the plan. He was quitting the band and going to college.

But Jesse’s folks gave him their best advice: stay in the band and get out on the road. They even gave the lads their ticket out of Santa Barbara by lending them the money to buy their first tour van——the first lag wagon, if you will. Flash forward thirteen years to the present, and let’s see how things turned out. Jesse Buglione is still the bass player for Lagwagon, one of the most popular groups playing punky power-pop on the scene today, with tours taking them around the world and over a million records sold. Thanks, Mom, Thanks, Dad.

Lagwagon’s new release, Blaze, is their first in five years. The album’s title was originally Blaze It! "When it was called Blaze It! everyone pretty much automatically assumed that it was a pot-smoking term, which we really never intended it to be. So we’re hoping that by calling it Blaze, it might lessen that impression," explains Buglione. Why the long wait between albums? "General laziness!" Jesse laughs. "Everyone had different projects going on. Our drummer (Dave Raun) was playing with Good Riddance for a while, and then our singer and drummer both had [Me First &] the Gimme Gimmes. Our two guitarists were in RKL. We were also getting to the point where we toured nine months a year for the last ten years, so we just wanted to take a break.

"We were initially planning on having Blaze out last summer. We went into the studio and recorded about half of the record, but we ended up scrapping some of it, and changing other songs. It’s been a really long process." Notably absent from the list of side gigs is Jesse himself, who took a much-deserved hiatus after coming of age in the public eye. Buglione spent his time away from the band about as far out of the spotlight as he could get. "I’ve been a warehouse slave. I’m a box technician. I take stuff out of boxes and put it in other boxes. I break boxes down and make new boxes." Buglione’s mild demeanor belies his real occupation, but as Jesse adds, "I think I’ve only been recognized twice in my hometown over the past few years."

I talked to Jesse in Austin, Texas as Lagwagon was preparing to showcase new material at that city’s venerated Emo’s nightclub. Now a seasoned veteran of life on the road, Buglione is not fazed by the occasional logistic snafu: "We woke up at the wrong hotel due to lost reservations." No doubt the band will have a few other rough edges to smooth over as their U.S. tour begins later this month. One tour stop will be in Los Angeles, where Lagwagon will record the show for a live album to be released on their long time label, Fat Wreck Chords.