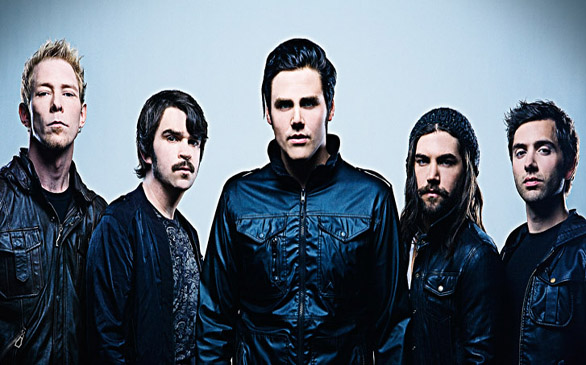 The members of After Midnight Project have endured more than their share of music industry hardship over the many years they’ve been pursuing career musicianship, both separately and together as a band. What sets the L.A. natives apart from the rest of our up-and-coming local rock scene, however, is that they see each of their struggles as a new opportunity to better themselves.

But then, you should expect no less from the hardest working dudes in the L.A. rock scene.

After parting ways with former label Motown and having to find a new bassist and drummer, all this year alone, a lesser band might have a hard time continuing on. And yet, the band seems more energized than ever, having completed a stint on the entirety of this year’s Vans Warped Tour to crowds that increased in size with each passing day. According to frontman Jason Evigan, being freed from label drama and the addition of two new perfect-fit musicians might be the best thing that could’ve happened to them.

“For the first time in five years, I swear, I feel like we’re friends, hanging out and having a good time playing music,” says Evigan.

With their newfound inspiration, Evigan, guitarists Spencer Bastian and Christian Meadows, drummer Ryan Folden and bassist Travis Flekenstein, the latter two being the latest additions, have opted to take their music in a new direction. While the band picked up an early following with infectiously catchy synth-pop jams, their latest work is of a decidedly more hard-rocking vibe.

“We’ve turned the rock up hard,” says Evigan with a grin.

But given some of his early musical influences, that shouldn’t be a surprise either.

“My dad was like, ‘You know what, you need to pick up an instrument,’” he says of his childhood introduction to playing music. “I had played piano as a kid but I hated it, and I was like, ‘I like Dr. Dre and Snoop Dogg, there’s no guitar in that.’ He bought me a guitar when I was 9 years old and made me take guitar lessons, and then I got into Pantera, Metallica, Green Day, Rage Against the Machine, Deftones, all those bands. Then I started Dillusion when I was 13.”

While the shift to darker tones might be in line with some of Evigan’s early stylistic influences, it also reveals some of his more recent personal struggles.

“The past year was pretty rough, being away from people while touring has been really hard for me,” he says. “Me and my lady broke up for a little while. I was in a totally different place in my head, so I’m pulling from some darker times. When you’re always away from someone you love, there’s always going to be heartache to pull inspiration from. It’s a little more aggressive and I think kids are going to be able to relate to it.”

The band’s newer work does also see Evigan pulling from outside his own experiences as well, with no hesitation to be critical when tackling issues that are even a little controversial.

“I’m usually first person with songwriting,” he says, “but occasionally I’ll write a love song or an even an angrier song that isn’t necessarily related to myself. ‘The Criminal,’ for instance, was about a soldier I met who was at war and told me his story.”

While After Midnight Project serves as Evigan’s primary cathartic outlet, he’s also endeavored into songwriting for other acts to air out some of his lesser-known influences, having penned songs for the likes of such varied acts as Street Drum Corps, Hypercrush and Papa Roach.

“It’s cool because after writing a certain way for After Midnight Project, you can’t just take a right turn, but this opens up different doors to express yourself,” he says.

But sometimes, a song is just too good to hand over to someone else.

“Our song ‘Scream for You,’ I originally wrote that one for Papa Roach, then said, ‘Screw it, I’m keeping this one,’” he says with a laugh.

“I’ve been writing so much for other people, it makes it more exciting to get back to writing for myself now. And we’ve been doing all these tours on top of that, working with other artists and songwriters, pulling from the knowledge they have has been really helpful to me as a songwriter too. I can’t wait to see what comes out for our next album.”

With December tentatively marked for the band to hit the studio again, if the new music they debuted over summer is any indication of what Evigan and his crew have in store, we should all be a little more stoked for what’s to come.