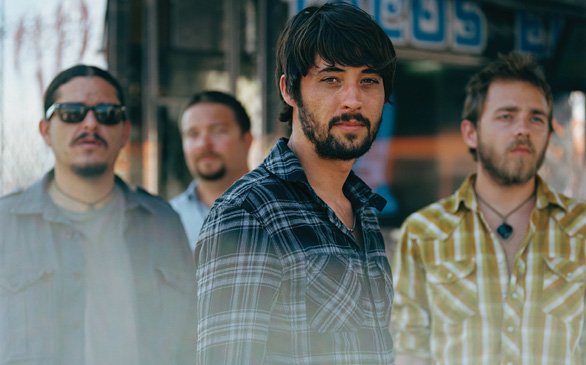 Ryan Bingham sits in the eye of the storm, and it’s giving me writer’s block. To attempt to describe a man of few words, it’s got to go something like this: He will wait for the world, have another cigarette, watch the world, then send its own story back to the lost and found.

What may well be the first few words of Bingham’s day that I’m hearing – it’s 11 a.m. a few weeks before his new album Junky Star hits stores – Bingham rasps a very kind “Hello, good morning.” Some irrelevant one-liner of mine drew a bit of a chuckle that cauterized those switchblade vocals into something much more stable that would later become much easier for me to transcribe from a soft recording.

Sweet as can be, Bingham, born in the southwestern plains of Hobbs, N.M., was filed early on as a “kid on the move.” In a modest, small town with all its down-reaching full-toned values, Bingham rode the way with a little smarts, a lot of found truth and that good old-fashioned honest-to-goodness. But as soon as he thought about buried roots, it would no sooner be time to move on.

“Well you know, I think that’s pretty rough when you’re a kid. ’Cause every time you settle in you’re up and movin’ again. Kind of like livin’ out of a cardboard box all of the time,” Bingham says. “We moved around a lot. We probably moved like every year, or every two years. My father was in the oil fields and was always movin’, looking for work.”

One thing about instability, about a life unsettled or unfettered coupled with understanding and any amount of think-outside-the-box-ness, is that one might discover that anything is possible. If you’ve got no roots and the solidarity comes from within a family unit or one’s self, what’s there to lose?

At 17 years old, upon moving down to Laredo, Texas, down at the border of Mexico, Bingham started working his way around a guitar, blown away by its fluidity and all its possibilities.

“My mother had bought me a guitar about a year before we moved there, and well, this neighbor guy just came along and showed me how to play a few songs,” he shares. “I was just kind of amazed how you could just up and create something like that out of your head. I was blown away.”

When Bingham writes music, it’s about the music. The lyrics fall into sense when the song arrives out of some mental place first, then lyrically, he knows what he needs to say.

“I always have the music first. The music always sets the tone or mood as far as what you’re gonna say. Mainly they’re all songs about life and living. A unique experience, people you meet, places you go … just kind of moving around and describing what’s going on around you.”

After his first record Mescalito came out in 2007, and having put his band the Dead Horses together not long before that, I had to ask how he got wrapped into the Crazy Heart movie, T-Bone Burnett and winning a Golden Globe and Academy Award.

“I had a couple of records out that the director had gotten ahold of and really he just called me up one day and said he’d heard the music and wanted to meet for lunch, talk about a script. We met up, he gave me a copy and asked if maybe I’d write some songs for it. I guess that all just happened from there,” he says. “Jeff Bridges, Stephen Bruton, T. Bone – I just had a lot of fun listening to all the stories they would tell from back in the day. It was incredible. It was as good as it can get, I guess! It was all really surreal and you kind of don’t get a chance to think about it until it’s all over with.”

Bingham, 29, is still that same humble kid who doesn’t really seem to have changed any, the way that fame and success can often alter people.

“People around you change more than you change,” he says. “Business kind of changes. You have more opportunities to do things. But I’m still the same. My award sits on a table like everything else.”