The New Face of Feminism 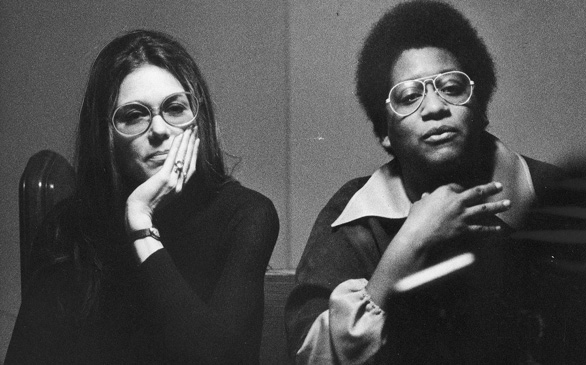 Gloria Steinem, left, is shown with Margaret Sloan in 1973 at a rap session at a co-ed dorm.
(Credit: St. Louis Post-Dispatch/MCT )

When Betty Friedan’s book The Feminine Mystique was published in the 1960s, it ignited a firestorm of controversy. The world had never been introduced to such brazen revelations about the female psyche. Soon, many feminists ranging from Gloria Steinem to Valerie Solanas would impart their ideals on the world at large. The women’s movement took shape and soon gave birth to many initiatives including the ERA or Equal Rights Amendment. Roe v. Wade gave women autonomy over their bodies, and birth control gave women the right to sexual and reproductive freedom.

However, in the years since the groundbreaking 1960s-1980s, feminism has nearly vanished from the mainstream landscape. Some surmise that the idea of it is still in play, even though public rallies or political calls to arms are less a part of the national cultural lexicon.

“When you watch TV, you see the ads for birth control pills and patches, don’t you?” says Anna Shur. “That’s feminism right there.”

In her teens, Shur was a self-professed member of the mid-1990s Riot Grrrl movement that originated in the Pacific Northwest. Riot Grrrls were seen as the feminist counterparts to the punk and grunge bands of the day. Groups like Bikini Kill and Bratmobile sang about women galvanizing to fight against misogyny. Shur spent many years following her favorite musicians and even volunteered with a number of local women’s groups.

“I’d never heard of Angela Davis until I was 19,” she says. “Schools are too busy teaching you about JFK and his sweet little wife, Jackie, to ever clue you in about the real heroes in this country.”

Shur proudly identifies herself as a “feminist,” but in a growing number of circles, she is a rare commodity.

Recently, the Gender and Education Association reported that in Great Britain, many young women are reticent to identify themselves with the feminist movement. Some cited derisive epithets once associated with feminism (such as “man-hating”) as their deterrents. For others, it is the need to appear glamorous and attractive to the opposite sex that keeps them away from the moniker.

Heather Porter is a Burbank waitress and hostess who refuses to associate herself with the movement or the term.

“Feminism makes people think you’re a lesbian or something,” says the 18-year-old. “My boyfriend would drop me so hard if I ever started talking that crap.”

Porter has been saving her tips to pay for a breast augmentation, which she hopes will one day land her on the pages of Playboy or Maxim magazine.

“My friend was telling me about [a] conversation on Facebook where everyone was disgusted by all the nudity on HBO’s shows,” she says. “I agree and was so happy [they] had the guts to say something. Why on a show called ‘Hung’ are we looking at fully naked women? Why do people insist that women want to look at other naked women exploiting themselves for male gratification, and yet, we hardly ever see men flinging their things in the wind?”

Although most feminists agree that visible portrayals of female sexuality are important to the movement, there is the concern that the fight has come full circle.

“In some ways, we’re right back to where we started,” notes Shur. “Sixty years ago, you were barefoot and pregnant in the kitchen with your 2.3 kids. Your sexuality was dictated to you by your husband and maybe your religion. But now you’ve got these girls who want to go back to that. They’re competing for male attention. They’re taking that fight and putting the winnings back in the hands of men.”

As for Porter, she sums up the situation with a suggestion that just might reignite the feminist revolution and bring a new, cohesive face to the movement.

“They need to get somebody – somebody cool and pretty and famous – and if they really want people like me to join them, have her show that it’s OK. Because right now, I just can’t be bothered.”