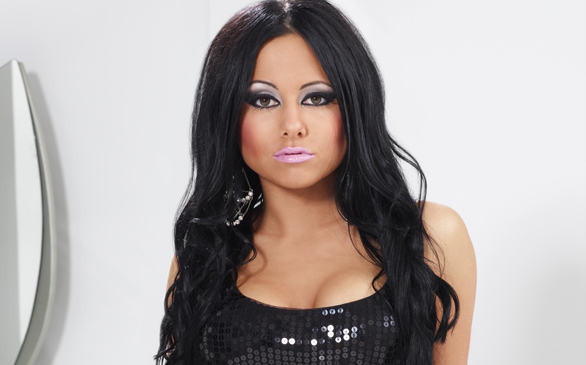 Can’t get enough of the Jersey lifestyle?

The Style Network might have just what you need with the brand new, second season of its hit program, “Jerseylicious.” With 20 fresh new episodes on order, “Jerseylicious” is the hilarious reality show featuring a mother-daughter owned hair and makeup salon in Green Brook Township, N.J., called the Gatsby Salon. At the salon, both male and female employees – all Jersey natives – stir up fun, excitement and of course, a lot of drama.

The stars say each episode is jam-packed with tons of must-see TV moments. There’s romance, fights, pizza tossing contests … and a strip show? Early episodes in the season set the tone for a brewing rivalry between salon resident mean-girl Tracy DiMarco and Olivia Blois Sharpe, a budding, talented makeup artist. As a feud between them in the salon escalates, things get ugly mid-season with the pair’s biggest TV fight – an on-camera exclusive that “might involve physical contact.” Viewers have to wait and see.

“We really are one dysfunctional family,” says Blois Sharpe. “People think the drama between me and Tracy is fake, but for the most part, it’s actually real worse than what you see on TV. The cameras have probably missed some of our worst fights. After the cameras stop rolling, it’s not like [we] are off having tea.”

Commenting on the genuine relationships and interactions between the cast, she adds, “That’s how we are. Everything you see, that’s us. People think we’re paid actors but this is the real deal.”

In the show’s second go-around, all of last season’s favorite stylists – Olivia, Tracy, Gigi, Alexa, Anthony and Anthony’s studly intern, Filippo – are back, this time with more action and ambitious stories. Anthony embarks on his new personal business prospects, “ladies man” Filippo hits up the parties and lives the fast-paced Jersey life while Alexa and Olivia look to expanding the “Glam Fairy” clientele to new heights.

“The new season is so much better. Not only are people going to see a lot more of the characters, but there’s just so much more going on,” Olivia reveals. “Trust me, it’s going to be good.”

Aside from partying and bringing the drama, the “Jerseylicious” cast of young, hot stars is ultimately living out their dreams. In addition to Olivia who hopes to own her own makeup studio one day, Filippo offers some advice to people his age: “I dropped out of high school and I’m 18 years old, but I’m making it. My advice for people is to not be lazy. You need to go in after your dreams. The more work you put in, the more you get out. If you don’t put in the work, your dreams are going to fade away and someone else will pick up on them.”

With dream chasing and salon styling at the core of the show, what’s a Jersey party without the signature Jersey look? Blois Sharpe says her glam-ready look essentials include “eyeliner with extreme wings, smoky eyes and a cool pink lip.”

“Ever since I was 14, I loved playing with makeup, getting dolled up and always being put together,” says Blois Sharpe. “I used to be a tomboy so maybe it’s me making up for lost time. My advice for aspiring makeup artists is to practice. If you love it, you’re going to do a good job. I can literally do makeup for people every day.”

Sure to find himself always on the move in season 2, smooth-talking Filippo is also a fan of the “Jersey” look.

“Jersey girls are beautiful,” he says. “Whether it’s the hair or the makeup – some girls don’t like to overdo it because they’re naturally beautiful – all Jersey girls like to dress to impress. They want to look their best and show off their beauty.”

With distinct styles and unique ways of life, the people of New Jersey have been the spotlight of reality TV across multiple networks over the past year. As for the reasons why, Filippo says, “We bring the drama, we like to party but most of all, we break the chains. People watch us because we keep people on their toes and do things never been done before.”

As the new season quickly approaches, Filippo offers, “Season 2 of ‘Jerseylicious’ will be one of the greatest seasons to ever hit national TV. There’s bigger drama. I have a bigger body – you might see without a shirt or you might see me catch some girls. There’s a lot I could say, but it’s a surprise.”

With a laugh, he adds, “College girls watch out!”

Season 2 of Jerseylicious premieres Sept. 5 at 8 p.m. on the Style Network.