The Milk of Sorrow 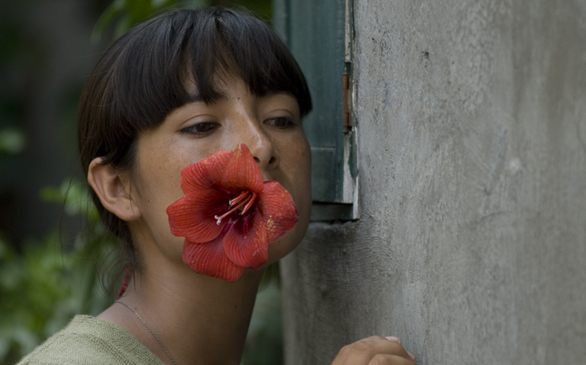 Magaly Solier as Fausta in The Milk of Sorrow
(Credit: Courtesy of Olive Films)

A title can say so much about a film, and I’d go so far as to say that a strong title makes for a strong movie. Sure, you can’t judge a book by its cover, a turtle by its shell, looks can be deceiving. But there is something about a good title that works just as hard as a top-notch publicist. In this case, The Milk of Sorrow refers not only to the plot, but also to the themes of repression, the inabilities of a people and the traumatic occurrences that have forced them into subservience.

The “milk of sorrow” is also the condition from which our protagonist Fausta suffers. It is an illness that is transmitted through the mother’s milk by women who have been violated during the Peruvian war of terrorism. Though the war is over, Fausta is a constant reminder. The country is still torn and is mending slowly, and it is the “illness of fear” that roughly keeps Fausta’s every waking moment in a chokehold.

When her mother dies, Fausta is left virtually alone and unable to get over the past traumas that haunt her. She is also living with a shameful reminder in the form of a potato she put in her vagina to protect her woman parts from unwanted and forceful intruders. As we follow Fausta along her path to redemption and forgiveness, from imprisonment to freedom, she also finds a fresh perspective.

Internationally recognized by the film organizations all over the world, including our very own Academy Awards in which it was nominated for Best Foreign Language Film, The Milk of Sorrow is a sort of lullaby. You can’t go into it expecting expensive action sequences, appearance-changing hair and makeup or any other element typically found in a big-budget Scorsese film.

The amazing thing about this movie is its subtleties. The scene that is most compelling without doing a whole heck of a lot is the one where an old, wrinkly woman sings a mournfully hypnotic song that refers to the demise of women in Peru’s society. Only the second feature film of writer-director Claudia Llosa who is a native of the country, The Milk of Sorrow looks like a film guided by the aged hand of an industry professional, and the film is a testament to the saying, “Less is more.”

The Milk of Sorrow releases in select theaters Sept. 3.