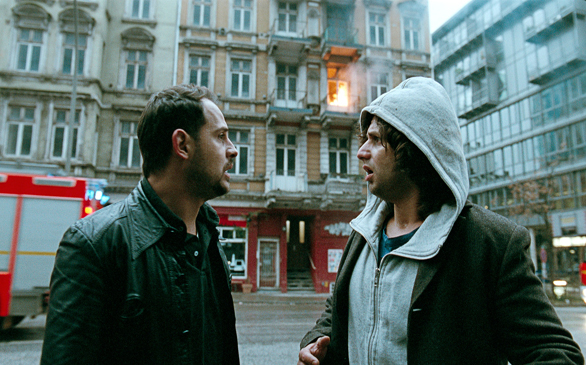 The recipe is right – if not a bit cheesy – for Soul Kitchen, a funny and sincere little movie from writer-director Fatih Akin, whose last feature-length film was the much more serious – and aptly darker – The Edge of Heaven (2007).

At the beginning of Soul Kitchen, in German with English subtitles, we meet the outspoken, slightly loud and zany Zinos (Adam Bousdoukos), a German-Greek with untamed mane who looks a bit like Eric Bana. Zinos owns and manages the film’s titular eatery – a ramshackle-looking place housed in an old warehouse near Hamburg’s Elbe River, which caters to the area’s working class clientele and serves up nothing but frozen, fried, greasy fare.

It is established quickly and early on that Zinos is having girlfriend troubles: The beautiful blonde he’s with, Nadine (Pheline Roggan), is getting ready to move to Shanghai to become a foreign correspondent and she wants Zinos to go with her. Zinos is hesitant to leave his restaurant, though; and matters become worse when he slips a disk in his back while trying to move a relic of a dishwasher in its kitchen. When this happens, he is forced to find a new chef, as it’s too painful for him to stand on his feet all day. He hesitantly employs the erratic Shayn (Birol Ünel), a rogue gourmet who refuses to cook up Soul Kitchen’s prepackaged fare, and who was fired from his last job for yelling at a customer who wanted his gazpacho served hot.

The character of Shayn is one of the film’s many golden nuggets, and his best line comes when he calls the patrons in Zinos’ restaurant “culinary racists” for refusing to eat his high-end menu items. The other characters are good, too; and they all serve to add a bit of depth and personality to a script that becomes too simple and contrived midway through.

Overall, Soul Kitchen is lighthearted and entertaining and proves that, so far, Akin’s work will not disappoint.