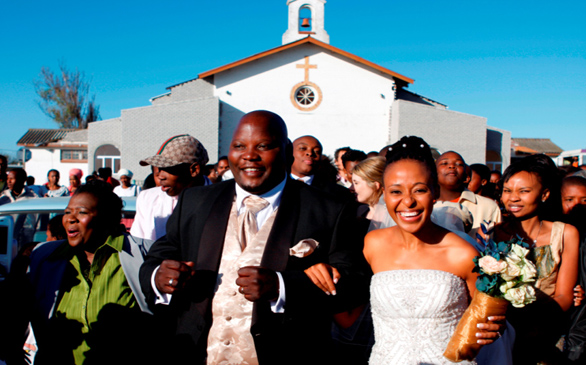 Like fine wine, which gets better with time, White Wedding is an infectious, warm-hearted comedy that tackles the chaos that erupts when a groom and his best man get lost on their way to the wedding.

As the film opens, Elvis (Kenneth Nkosi), the groom, is getting ready to make the arduous journey from Johannesburg to Cape Town via Durban, where he plans to meet up with his best man Tumi (Rapulana Seiphemo). Upon arrival in Durban things don’t go according to plan because Tumi, a serial cheater, has an argument with his girlfriend, which results in his vehicle being destroyed. With no other means of transportation to continue on to Cape Town they are forced to borrow another car to make it in time for the wedding rehearsals. But as night falls, Tumi’s shortcuts don’t end up making up for lost time, and tensions and tempers flare as Elvis realizes he might not make it in time to his own wedding.

A pretty straightforward flick that pulsates with culture and unforgettable characters, the movie follows the events from both the groom and bride’s perspectives. The bride, Ayanda (Zandile Msutwana), has shunned a typical traditional African wedding, much to her mother’s dismay, preferring a white wedding at a glamorous palm-fringed hotel to an elaborate cultural ritual.

Laughter ensues as the story shuttles between a fretful bride and a groom who is struggling to find his way through the Eastern Cape with a goat for the wedding feast in the car and a young English hitchhiker (Jodie Whittaker) who they pick up along way.

Nkosi, one of South Africa’s most popular TV presenters, has a great screen presence as the anxious loyal and committed groom, while Msutwana as the worried bride is equally convincing.

With a simple message that love can overcome any obstacle, White Wedding weaves all its threads so satisfactorily that audiences will feel like celebrating at the wedding as much as any of the invited guests.