Rock Kin Roll With MrNorth: Irish Band Keeps it All in the Family 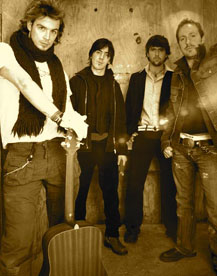 The history of rock ’n’ roll is bloated with tales of familial fisticuffs – just ask Oasis, the Meat Puppets or The Black Crowes. In their day, each of those bands had an undeniable musical synergy despite the fact that they were eventually torn asunder by battling brothers.

Mrnorth knows all about the creativity that’s nurtured by a family bond, as the band is made up of brothers Emmett (guitar) and Oisin (bass) O’Malley, their cousin Colin Smith (vocals) and close friend, drummer Adrian Mordaunt. Emmett O’Malley feels that it’s the band’s songwriting process that keeps everyone’s ego in check, a fact evidenced by the smoothness of mrnorth’s debut, Lifesize (Uninhibited).

"There aren’t many songs on the album that one individual has written," offers O’Malley. "We’re all in a room together just jamming in stuff and making stuff happen. It keeps the horrible fraternal bickering at bay."

Mrnorth started out as teenagers in their native Dublin, Ireland but now reside in New York City.

"Not a lot was happening in Dublin at the time," O’Malley explains. "It was a very lukewarm scene compared to the early ’80s when bands like U2 and The Waterboys were popular." With nothing much was going on at home, mrnorth gladly accepted an offer to move their tour to Italy.

"I couldn’t wait," O’Malley enthuses. "A musical vacation in beautiful and warm Italy! We gigged around for the better part of two years there and made a little bit of a name for ourselves. Around 1999 we were invited to play some showcases in New York, and that’s when we made the move to America."

Having stayed for five years so far, mrnorth is finding life in the Big Apple quite agreeable.

"We indulge in the nightlife every chance we get," says O’Malley. He jokingly adds, "I just broke up with Paris Hilton. I thought those sex tapes were very distasteful."

A conversation with mrnorth is flavored with liberal amounts of humor, and Smith notes that he has been the subject of some good-natured ribbing from O’Malley and his other bandmates, brought on by his appearance in a fashion photo shoot for the New York Times.

"I like it," the singer says demurely. "Each jibe, each jab at me for being pretty just makes me feel even prettier. They can throw sticks and stones but I will still be the prettiest!"

Mrnorth has earned a lot of new fans this year, having made a splash at major festivals like Bonaroo and Summerfest. Smith’s voice has a universal appeal that brings the work of the late Michael Hutchence of INXS to mind, with their album Lifesize carrying a big, radio-ready sound packed with potential hits.

Lifesize was produced by Jerry Harrison and, according to Smith, the former Talking Heads keyboardist had a calming effect on the band.

"We were probably trying a little too hard. He helped us to just relax and play music. But it was definitely a thrill working with somebody who has such an impressive work record."

Harrison achieved exceptional results, especially on "Let Me In" and "Wastin’," where Smith and O’Malley harmonize flawlessly. The funky bass line on "Speak No Evil" has helped to land the cut on the recently launched MTV-U, while the quiet and reflective "Bring it On" has been pulled as Lifesize’s new single.

The busy band is becoming so successful that New York will probably remain their preferred residence, with Smith even hinting that mrnorth may eventually become citizens of the United States.

"I heard that Pierce Brosnan just became an American citizen," says Smith matter-of-factly. "So maybe we’ll get Pierce to process our applications!"