South for the Winter: David Gordon Green Explains the Nitty Gritty behind Undertow 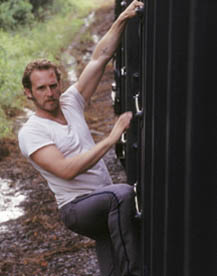 Undertow is something moviegoers haven’t seen in a long time – a Southern Gothic family drama mercifully free of the usual clichés about the South.

"The South is just someplace that people don’t really get right," says writer-director David Gordon Green, who is a Southerner himself. "In terms of locations or feelings, there’s so much that goes unnoticed. There are so many corners that are unexposed, and people and voices that haven’t been heard in movies."

What Green brings to the screen is not lazy and hospitable, but downright savage. Undertow depicts the life of John Munn (Dermot Mulroney), a simple man who has retreated to the backwoods of Georgia where he lives in isolation with his two sons – 17-year-old Chris (Jamie Bell) and 10-year-old Tim (Devon Alan). Emotionally devastated by the recent death of his wife, Munn is simply going through the paces of life and letting Chris do much of the work around the house.

Things become complicated when Munn’s charismatic brother Deel (Josh Lucas) arrives – fresh out of prison and driving a stolen car – and Munn agrees to take him in. But Deel has reasons for revenge, and it’s not long before he kills his brother and sets out chasing Chris and Tim who have made off with a stash of ancient Mexican coins that were hidden in the house.

Fratricide, patricide, gold coins – the story is half-realistic and half-fabulous, much like the true story upon which it is based. As Green relates, the story came from an unusual and unverifiable source.

"A kid called a runaway hotline with the story. It sounded like the kid had read some pirate book – nobody knows how much of it was really true. The story is not on any law books or anything, there was no court case. It was all through word of mouth," Green says.

"What interests me most about the story is the kid’s interpretation. I don’t know how much the kid was saying just to keep the hotline operator interested," he continues. "But what I imagine is that he put a filter on his story, so to speak, like a defense mechanism, and his interpretation of this horrific tragedy turned into an adventure. He turned his fear into bravery. The original draft of the script was more realistic but I was more interested in the fantastic parts – the gold coins and so on."

Stylistically, Undertow harks back to the classic action films of the 1970s. The photography is grainy and there are abundant zooms, flashes to negative imagery, and freeze-frames. Yet the film isn’t set in any clear-cut time frame, and appears to be lost in period limbo.

"I didn’t want it to be time-specific. Our concept with the art department was that it’s as if pirates still exist, but they cook on George Foreman grills," Green says with a smile. "I wanted it to have little notes of the contemporary world, but not a lot of the devices, like cell phones and the Internet. Honestly, I just designed my utopia of where I wish I lived, from the junkyards to the swamps to the houses and all. I just love old, rustic, historical types of things."

Green mentions the original Cape Fear, Night of the Hunter and films from the ’70s including Macon County Line and Electra Glide in Blue as films that inspired him for the movie.

"Those are the movies I grew up watching at three in the morning on TBS – they have a lot of freeze frames and zooms and optical effects and stuff."

Perhaps his most clever homage was his use of the classic United Artists logo from the ’70s – the monolithic silver UA letters displayed as an orchestra of strings reaches crescendo – a logo that, for fans of ’70s cinema, evokes gritty cop dramas like Dirty Harry.

With excellent performances all around, especially Bell and Lucas, Green has scored an artistic triumph with Undertow.

"I’m interested in everything and I want to do a diversity of projects. I’ve done a quiet drama (George Washington) and I’ve done a romantic movie (All the Real Girls)," says Green. "And I wanted to do [Undertow] – more of a balls-to-the-wall, get-him-by-the-gut-and-slash-his-throat kind of movie."