Neshoba: The Price of Freedom 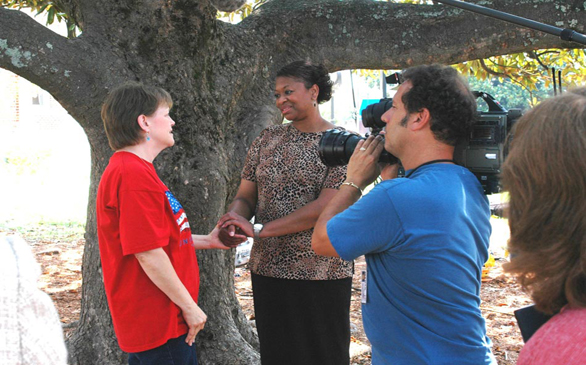 Neshoba County, Miss., was burning with racial hatred in the mid 1960s. It was there in June 1964, during the height of the civil rights movement, that a mob of Klansmen brutally murdered three civil rights workers – James Chaney, Andrew Goodman and Michael Schwerner – two Jews from New York and an African American from Mississippi. Their disappearance and murder quickly became an international story as the shocking crime woke up the consciousness of the world, inspiring the movie Mississippi Burning.

Neshoba tells the story of these three American heroes and the Mississippi County, which is still divided over the meaning of justice 40 years after the murders. At the time of their disappearance, the trio was in the Deep South helping register African-American voters. Hundreds of FBI agents investigated their disappearance, leading to the discovery of their bodies 44 days later. They had been buried 15 feet beneath an earthen dam.

Through various interviews with the county’s residents, the film takes a glaring look at the brutal murders. Some of county’s residents are still struggling to find peace with their town’s violent and racist past, while others want to forget it ever happened. Although the county has become a model of racial progress in some limited respects, it took 41 years for the state to convict one man, Edgar Ray Killen – an 80-year-old Baptist preacher and notorious racist – in the killings.

In Neshoba, filmmakers Micki Dickoff and Tony Pagano capture the outspoken views of Killen, the only Klan member charged with the murder, and take viewers on a journey into the mindset of a man who still feels the murders were justified as “self-defense” and a way of life. A documentary they began shooting on the 40th anniversary of the killings, they gained unprecedented access to Killen, following him shortly after his indictment through his trial. Although various Klansmen bragged about what they did in 1964, no one was ever held accountable until 2005, when the state indicted Killen – the mastermind behind these murders.

With intimate and surprisingly candid interviews with Killen, the families of the victims and Neshoba County citizens with diverse points of view, the film shares graphic pictures and shocking details of these gruesome murders and brilliantly explores whether the prosecution of one unrepentant Klansman constitutes justice.


Neshoba: The Price of Freedom releases in select theaters Sep. 10.
Article posted on 9/7/2010
This article has been viewed 1806 times.