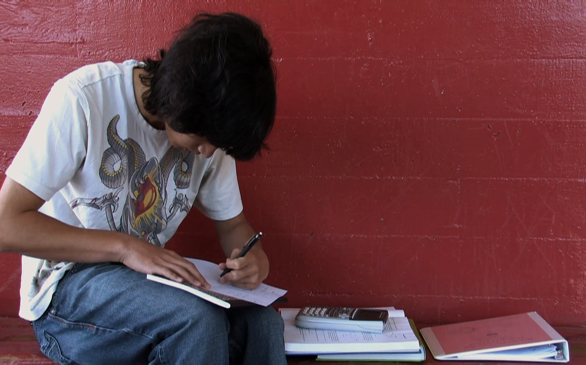 In her latest documentary, filmmaker and mother of three Vicki Abeles tackles the very personal subject of the current state of the American education system. Race to Nowhere features interviews with parents, students, teachers, administrators and doctors, all arguing that our schools are heavily performance-driven and force kids to give up their childhoods in favor of becoming little “workers.” This leads to high stress levels, which in turn leads to physical illness, depression and in some cases, suicide. All this trouble is so students can to get into the university level, which doesn’t necessarily guarantee employment in adult life. Hence the “race to nowhere.”

Abeles was inspired to document this issue when a 13-year-old girl, Devon Marvin, committed suicide because she received a bad grade on a math test. This, combined with Abeles’ worry for her own children, who were developing stomach ulcers and insomnia, pushed her to seek out the answer to the question: What about our school system causes children to become sick, depressed and sometimes suicidal?

The answer is that there is a prevailing notion in our current society that to be successful, one must not only get into college but into a “good” college. Students are told that they must take AP classes, with massive amounts of homework, to even be considered for a top college. Also, the No Child Left Behind initiative has created a testing culture in schools, where every element of a class’s curriculum is geared toward good scores on standardized tests – one of the few ways cash-strapped schools can get extra funding. Instead of being taught how to become lifelong learners and critical thinkers (qualities valued in the work place), kids are groomed to become memorizers of data. One teacher even goes as far as describing it as a “mechanization” of our nation’s youth.

Abeles tries to explain the situation in a way that includes everyone involved in the system. Yet, because she is a parent, she does not completely include parents in the equation; early home life is where a child first gets a zest for learning that can help them get through a school system such as we have in the United States. Some parents are so concerned about college that they do not realize how their pressuring, combined with schoolwork, affects their child. As ever in documentary film, the filmmaker’s point of view colors this film.