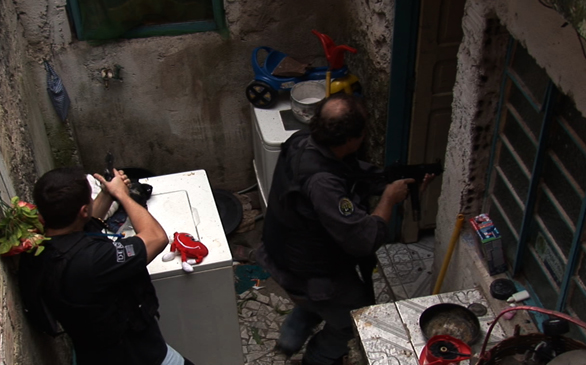 Members of the Anti-Kidnapping Division of the São Paulo Brazil police department on assignment
(Credit: Sequestro)

The film opens with a grisly voice demanding, in Portuguese, that his ransom money ($15,000 U.S.) be paid to him. A young man, the victim’s son, cries that he doesn’t have it. The criminal replies, “We will make him suffer if you don’t pay up.”

This is the world according to Sequestro, Jorge W. Atalla’s documentary about the large kidnapping business in São Paulo, Brazil, and the men and women who work to rescue their victims. Between 2005 and 2009 Atalla and his crew followed the Anti-Kidnapping Division of the São Paulo police department (Divisão Anti-Sequestro aka DAS) as they worked to rescue people.

Watching this film dispels any misconceptions you have about kidnapping. Being safe isn’t so much about being smart as being lucky. One victim was kidnapped when men in a police car pulled her over. Another man was kidnapped by six men from his office.

Kidnapping in São Paulo has its roots in the collapse of the Soviet Union. When the Soviets stopped sending money to leftist movements in Brazil organizations had to find new ways to fundraise, which led them to extortion. At the same time, it led to a culture of criminals who believed kidnapping innocent people served a greater purpose. Atalla takes the time to interview these criminals, many of whom are behind bars or have been recently released.

In the end, Sequestro is an uplifting movie – not in the sense that everything ends happily, but because it captures the indescribable joy the DAS brings to the rescued and their families so perfectly. For every victim who is rescued there is a happy reunion, a family restored, a life heading towards normalcy. To see a young man burst into tears when he realizes he’s been found and will be returned to his family is to see the purest, simplest form of ecstasy. These people, maybe for the first time in their lives, are happy just to be alive.